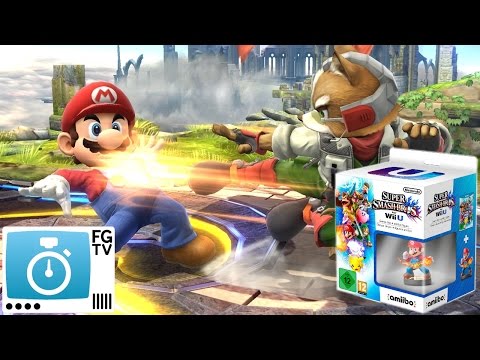 Super Smash Bros. is a series of fighting games that began on the Nintendo 64 in 1999. Players choose characters from Nintendo games like Mario and Zelda, with some extra non-Nintendo characters like Sonic. The stages in which the fights take place are also themed around other Nintendo games.

There is a single player campaign with a series of opponents, but the appeal of the game is the same screen multiplayer against people in the same room, though you can also play online.

New to the Wii U and 3DS versions of the game is compatibility with Nintendo’s new Amiibo figurines, which work through near-field communication (or NFC). On the Wii U, you place these figurines on the GamePad. The new 3DS, which is coming to the UK in early 2015, has NFC built into the bottom touch screen, and there will be an adaptor for the original 3DS/2DS.

The Amiibo figurines make that character appear in the game, either to help you or to fight against you. These “figure players” start at level 1 and can be trained up to level 50. They also learn from your fighting style and the moves used by opponents. You can give equipment that you pick up in the game to your figure players, and they’ll collect things during battles and give them to you afterwards.

You can also use these Amiibo figurines in other games. In Mario Kart 8 they unlock new costumes. Other compatible games include Hyrule Warriors and upcoming games like Captain Toad: Treasure Tracker and Yoshi’s Woolly World.

2. Developer:
Super Smash Bros. for Nintendo 3DS and for Wii U were both developed by a collaboration between Sora Ltd. and Bandai Namco Games.

3. Format:
The Wii U and 3DS versions of the game are similar in terms of their character rosters and stages, but there are a few differences, including some exclusive stages and trophies.

Multiplayer is specific to each version, so players on Wii U cannot play against those on 3DS. However, those who own the 3DS version can use their 3DS as an additional controller to play the Wii U version.

5. Duration:
While the Super Smash Bros. games do often have a single player campaign, they’re not really meant to be completed. The focus is on the multiplayer, especially between players in the same room. In that sense, it’s a party type game that you can go back to again and again.

6. UK and Europe – PEGI rating and additional consumer information:
In the UK and Europe, PEGI rates Super Smash Bros. for Wii U as only appropriate for those aged 12 and older, with a content descriptor for violence, namely “non realistic looking violence towards human characters”, and also mentions that the game “allows the player to interact with other players online”.
http://www.pegi.info/en/index/global_id/505/?searchString=super+smash+bros&send=Search

The Games Rating Authority expands on its PEGI rating by describing the violence, which it states “consists of kicks, punches and the use of some weapons. There is no blood or visible injury. The characters reactions to the violence are over exaggerated with bright flashes and smoke effects on impact.”
As for online play, it states that this “may involve real-time interaction with other players”.
http://gamesratingauthority.org/pegi/search_aci.html

7. US – ESRB:
In the US, the ESRB rates Super Smash Bros. for Wii U as E for Everyone 10+, with content descriptors for Cartoon Violence, Comic Mischief, and Mild Suggestive Themes.
http://www.esrb.org/ratings/synopsis.jsp?Certificate=33625

8. Common Sense Media:
Common Sense Media rates Super Smash Bros. for Nintendo 3DS as appropriate for those aged 11 and older, stating that “while it sounds violent, there’s no blood or gore”.
https://www.commonsensemedia.org/game-reviews/super-smash-bros-for-nintendo-3ds

9. Themes:
The combat-focused game-play encourages a competitive spirit that may carry over into real-world. While frustrations can rise the on screen combat is kept firmly in the cartoon genre.

10. Why people play:
The Super Smash Bros. games are relatively simple as fighting games go, with no real need to learn complicated combinations of button presses, though there’s enough to the game that experienced players compete in tournaments.

Generally, however, these games are designed to be easy to pick up and play even by those who don’t normally play games, like in a party type situation. These games are great for those who love both Nintendo games and playing with friends.

The Wii U version is particularly strong for multiplayer, since you can have multiple people playing on the same big screen, up to eight in some modes. The Amiibo functionality adds another reason to check it out.