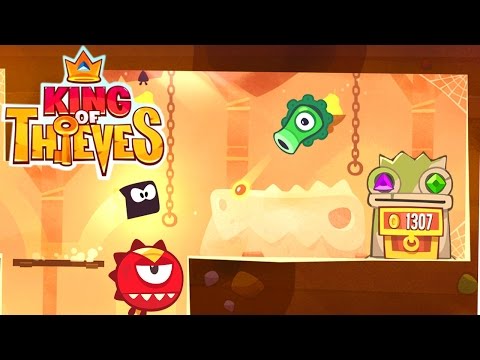 ZeptoLab announces release date for its first multi-player game King of Thieves. The game will be available on the Apple App Store starting February 12, 2015. A version for the Amazon Appstore is planned for release on February 26, and Google Play users will be able to join the party on March 5, both on Android portable devices and Android TV.

The game will offer an entirely new, hybrid multiplayer gameplay style, combining the top-quality art and animations that helped to make Cut the Rope a success with elements from genres like platformers and tower defense games. Players run and jump to dodge deadly traps, competing to break into each other’s customizable dungeons and accumulate enemies’ gems and gold in asynchronous multiplayer gameplay. Gems are the main treasure and are crucial for game progression. The more gems you steal, the higher your scores in ratings and leagues.

The title will test players’ fingers as well as their brains, allowing them to create their own custom defense to keep their hoard safe. King of Thieves’ asynchronous gameplay and persistent world encourage meaningful multiplayer experiences, as players form rivalries and compete to increase their leaderboard ranking, unlocking upgrades and new traps.

Screenshots and other assets are available here: goo.gl/kZphBq