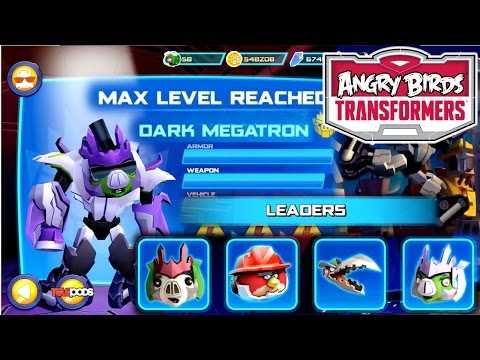 There are a whole host of characters to collect in Angry Birds Transformers, with a number of interesting variants, but the most sought after of these has to be Dark Megatron. At a cost of 3000 pigs, he’s the most expensive character in the game and also one of the most powerful. As a member of the Leaders Squad alongside Bludgeon, Grey Beak Grimlock and Sentinel Prime, he’s possibly the best of the lot. When each of these characters are fully upgraded, they’re unstoppable. The pigs and the eggbots are no match for his super powerful black hole generator and with a buddy alongside him, levels almost become too easy.

Thanks to the gem glitch we encountered during the game’s soft-launch we have everything we need to upgrade Dark Megatron all the way to Level 10, finally completing our Leaders Squad. Watch us unlock him, walk you through the upgrade and look at his customisation options, revealing one special customisation that requires a rank up to unlock. Finally, we’ll take him for a spin and unleash Deceptihog fury on pigs and eggbots alike.