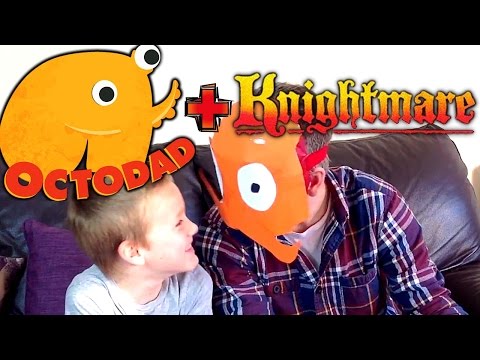 In our first Let’s Play of Octodad we found out first hand just how difficult it is to control an Octopus in real world environments. So rather than make things easier for ourselves in this second Let’s Play, we thought we’d take the challenge to the next level.

Diffculty levels in games are often described as easy, normal and hard, but some games like to include a nightmare mode, which aims to stretch your skills to the very limit. With the challenge of Octodad revolving around how adept you are at manipulating his various limbs with a controller, we thought it would be fun to take that difficultly level one step higher by effectively blindfolding the player controlling Octodad and having him receive verbal instructions from a second player. Crazy? You bet!

Co-incidentally, there was an old children’s program around in the 1990s, that involved just such a control scheme. Fittingly, it was called Knightmare (http://en.wikipedia.org/wiki/Knightmare). So with a bit of sticky tape, some orange paper and an old Iron Man mask, we’ve created our very own Octodad Style “Helmet Of Justice”, which will leave Octodad’s controlling player blind and at the whim’s of his instructor. So come with us as we play, Octodad Knightmare Mode!

Octodad started life as game developed by students at DePaul University, but grew in popularity so much that the team behind it set about raising funds for a sequel via Kickstarter. That sequel, Octodad: Dadliest Catch has now made it’s way to the Playstation 4, so we go tentacles on with the game to see what makes it such a special title for kids and adults alike.
Content supported by Sony including access to PS4 game and hardware.