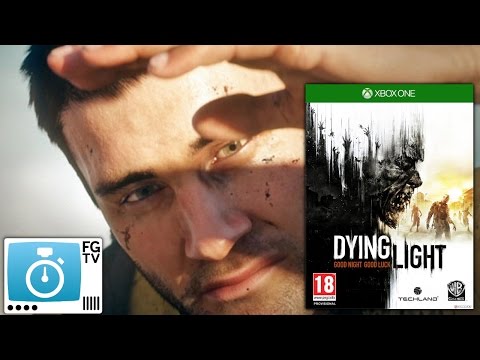 Our guide to Dying Light, from what makes it so great to what to watch out for here’s the ultimate 2 minute (or so) guide.

1. Genre
Dying Light is a horror game played from a first person perspective, in which players fight or evade zombies in an effort to survive, mostly with melee weapons rather than guns. The city of Harran can be explored in a parkour style, running and jumping across rooftops, while weapons can be improvised and improved by combining objects to make novel zombie killing devices.

The ‘dying light’ of the title refers to the change that comes over the zombies once night falls: during the daytime the undead are largely docile and easily avoided, but after dusk they become much more hostile and dangerous, with special ‘volatile’ zombies presenting a major threat.

Co-operative multiplayer allows up to four players to play together online (there’s no split screen option) and a ‘Be the Zombie’ mode that allows one player to be a lethal zombie and take on human opponents.

Dying Light has a similar large open world to explore like Dead Island, but where that game was largely ground-based there’s a free running agility to Dying Light reminiscent of Mirror’s Edge.

2. Story
The main character of Dying Light is Kyle, an undercover agent sent on a mission into the city of Harran, where the zombie infection has led to a quarantine being imposed and the state and rule of law failing. Kyle’s ruthless dedication to his mission parameters is challenged by the people he encounters in Harran, and his loyalties are tested.

3. Developer
Dying Light is developed by Techland, the studio behind multiplayer zombie shooter Dead Island and several installments in the Call of Juarez series of Western themed shooters.

4. Format
Dying Light’s basic edition costs £50/$60 on XBox One or PS4 or £40/$60 on PC, with downloadable content available as a season past costing £20/$16. Although there was originally a PS3 and 360 version planned these were cancelled during development.

Subscriptions to PS Plus or XBox Gold will be required to play online in the console versions. Versions of the game should be relatively similar, although some optimisation in terms of frame rate and so forth may be available for PC players with high end machines.

5. Duration and Difficulty
There’s over 50 hours of gameplay promised for Dying Light, including downloadable content. Co-op players should find extra value in replaying missions together.

“In the UK and Europe, PEGI rates 18 for Violence and Language.

The GRA expand on their PEGI details by saying that the game contains ‘strong graphic violence’, mainly as you fight zombies: ‘Detailed blood and guts are shown and the player is able to decapitate and dismember the zombies with visibly gory results. Some scenes include defenceless humans being mutilated for their ‘crimes’. Strong language […] is frequently heard throughout.’

7. Other Ratings
The ESRB rates the game M for Mature for blood and gore, intense violence and strong language. They expand on this rating by stating that “Players use axes, machetes, rifles and tools to kill enemies in frenetic melee-style combat”. Furthermore “Red blood-splatter effects occur frequently; large blood stains can be seen in the environment. Enemies often get dismembered and decapitated during combat; a handful of sequences depict mutilated bodies with exposed organs/viscera. The words “f**k,” “sh*t,” and “a*shole” can be heard in the dialogue.”
http://www.esrb.org/ratings/synopsis.jsp?Certificate=33770&Title=Dying%20Light&searchkeyword=dying%20light

8. Themes
Zombie stories virtually always show civilisation collapsing as the undead hordes overwhelm the living, but Dying Light aims to go deeper by casting the player as an agent sent into a quarantined city who needs to decide between his narrow, ruthless mission parameters or a more humanitarian approach, helping survivors.

Starting out relatively weak, players will want to avoid the zombies as much as possible while developing their skills, using traps to distract or destroy them. Even having levelled up into a super-agile freerunning agent, the player may feel incredibly empowered – but will also have to decide how to use that power, whether to stop and save civilians or stick to the mission.

9. Why people play
Choosing which skills to use and improvising with weapons and traps makes for more varied play, with the pressure of encroaching zombies making for tense action. The background of the ruined city of Harran makes for an atmospheric environment, and the conflict creates some unsettling situations that make Dying Light an odd yet appealing combination of gory zombie killing fun and a bleaker fight for survival in a collapsing society.