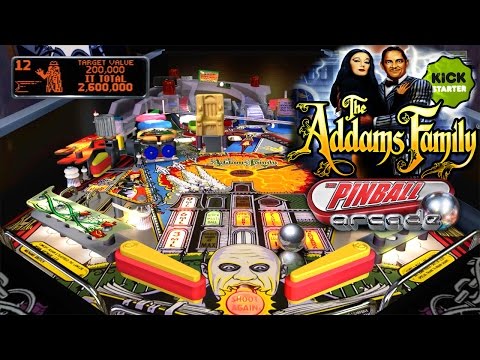 Our hands-on with Addams Family on the Pinball Arcade. We tried the game on PC.

Bobby King, lead designer on Pinball Arcade talked us through the table from its creation to playing tips.

The process begins by getting a well maintained version of the physical table and painstakingly disassembling it into constituent parts. These are then modeled on the computer before each piece is photographed and have the image applied. From here the team emulate the brain of the table that connects the switches to the Dot Matrix Display and tracks the score.

The table is then tweaked in the development environment so the ball can move around like the original before going through rigorous test both with Farsight Studio’s in house pinball experts as well as a bank of pro players who ensure the finished table offers the same pitfalls and opportunities for top end pinball techniques as the original.

Trying out the beta version of the table led the conversation to which platforms it would be available on. Currently the Pinball Arcade is released on iOS, Steam (Windows /Mac), Android (Google Play), PS4, PS3/Vita, Kindle (Amazon App Store) and OUYA. On other platforms the game is in process, Xbox One, Xbox 360, Wii U and Linux.

One platform that King confirmed was now on the horizon was the 3DS. With the arrival of the more powerful New 3DS XL (and New 3DS) Pinball Arcade was now possible on the system. King suggested this was likely for 2015.