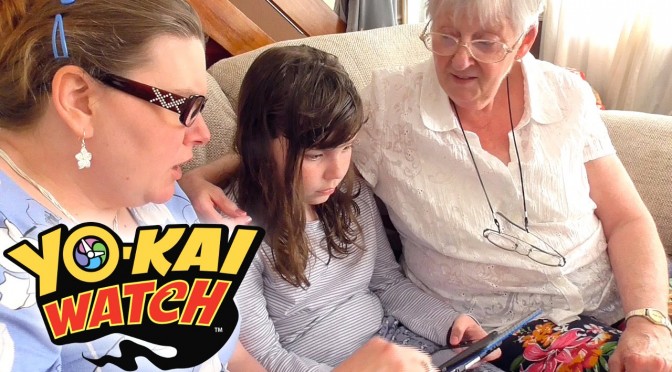 We go back to check up on our test family checking out Yo-Kai hunting of YO-KAI WATCH on the Nintendo 3DS.

Official Blurb:
“Yo-kai are the physical embodiment of everyday problems, and they live everywhere in our world—under cars, near vending machines, in the river—you just can’t see them.

With the power of the Yo-kai Watch, though, you can find these hidden Yo-kai, befriend them, and call upon their powers when you need their help. There are over 200 different types of Yo-kai just waiting to be discovered!”

TARGET
Help your Yo-kai focus on a certain foe, or a weak spot on a boss.

PURIFY
If your Yo-kai gets Inspirited in battle, heal it and gain extra experience points.

ITEM
Use items you’ve collected to help your team or to get an opponent to like you.

TEAM CHEMISTRY
Yo-kai from the same tribe fight better together, but they must be next to each other to unleash their combined Unity power, so chose their place on your Yo-kai Watch carefully.

TAKING ON THE BIG BADDIES
You’ll need to use all of your strategizing skills against the super strong Yo-kai bosses. Often times, though, these seemingly unbeatable baddies will have a glaring weakness you can exploit.

A TOKEN OF FRIENDSHIP
When you become friends with a Yo-kai, they give you their Medal, which you can use to call on them for help. Yo-kai won’t give Medals to just anyone, of course. You’ve got to prove your worthiness, either by doing them a favor or impressing them in battle. Sometimes you can even earn their respect by giving them their favorite treats!

QUITE A COLLECTION
You can only hold 6 Medals in your Yo-kai Watch at a time. The rest are stored in your Medallium, a coin book that serves as a Yo-kai encyclopedia.

Video supported by Nintendo including access to the game and hardware.