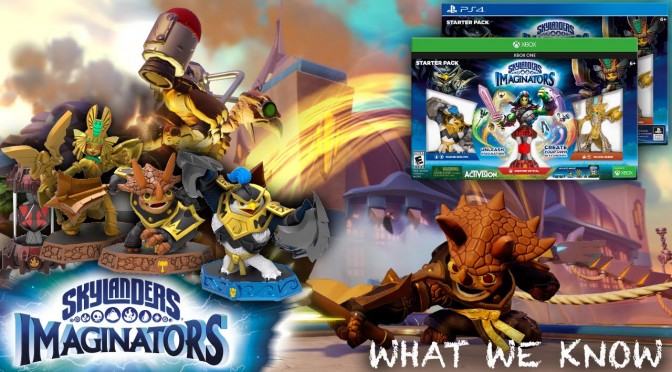 Long ago when the Ancients used a mysterious power known as “Mind Magic” to create everything in Skylands. With it, they conjured into existence anything that they could imagine! However, they soon learned that in the wrong hands, it could be very dangerous, and so they sealed it away so that it could never be misused. After discovering this ancient secret, Kaos has unleashed the power of “Mind Magic” into Skylands once again – and he is using it to create an unstoppable army of Doomlanders, the likes of which have never been seen! Now it’s up to Portal Masters to create Skylanders Imaginators from their own imagination and stop Kaos and his evil Doomlanders before it is too late. And to help train them, Eon is sending the greatest mystic warriors of all time – the Senseis!

After the events of Skylanders® Trap Team, Eon gave these Villains a choice – either go back to a newly reformed Cloudcracker Prison or become Skylander Senseis, teaching a new generation of Imaginators their formidable battle skills as well as how to stay clear of a life of crime. They accepted the deal but first had to prove themselves by re-arranging all the books in the Academy’s library, a task which took almost two years, testing every ounce of will they had. And their knowledge of the alphabet.

Returning franchise favourites will only feature in the story.

Senseis also have their own unique benefits including the extraordinary ability to unleash Sky-Chi – the ultimate Battle Class super move.

Part drops are randomised to support multiple playthroughs
Two players cannot create characters at the same time
Completed Imaginators are not saved in the game, they exist solely in the creation crystal

No word yet on Elemental Zones
No word yet on any other game modes, e.g. Battle
Digital vehicles are available for racing if you don’t own Supercharger Vehicles

No confirmation of Wii or 3DS
No pack images for PS3, 360 or Wii U
Same game on all announced platforms