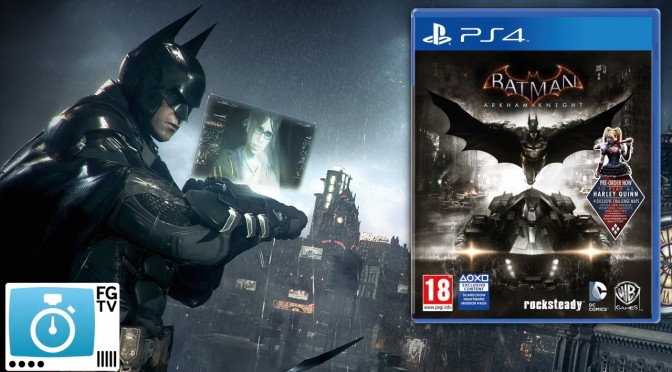 1. Genre and Story
Arkham Knight is an action game in which you play as Batman from a third person perspective, fighting criminals and solving puzzles in a Gotham City ravaged by two opposing forces: Batman’s rogues gallery of super-villains, and the forces of paramilitary vigilante the Arkham Knight. This is the third and final part of developer Rocksteady’s Arkham trilogy, and the first to be developed for the current generation of consoles.

Gameplay promises the beloved Arkham combination of fluid, counter-based combat, in which you turn enemies’ attacks against them, and exploration in which you glide around Gotham City solving puzzles and investigating mysteries. New gameplay innovations include the first chance to control the Batmobile, allowing for explosive vehicular combat as well as more rapid navigation of a much larger Gotham City map than previous games, and a Dual Play feature where Batman’s allies can be seamlessly brought into a fight and controlled by the player.

The Arkham series’ counter-based combat has been influential on the fighting in Shadow of Mordor and later installments in the Assassin’s Creed series, but there remains nothing quite as empowering as the feeling of being Batman.

British developer Rocksteady have made their name on the Arkham games.

4. Format
Arkham Knight is available for Playstation 4, XBox One and PC. The game costs around £55/$60, with a season pass prepurchasing story DLC and costumes costing an additional £30/$40.

5. Duration and Difficulty
Arkham games boast a solid central campaign of around 11 to 12 hours play, but offer considerable replay value in terms of sidequests, hidden secrets and open world play that can at least double that play time, with further extensions in the form of downloadable content and challenge maps.

6. UK Rating
In the UK and Europe, PEGI rates Arkham Knight PEGI 18 for infrequent violence towards defenceless persons.
http://www.pegi.info/en/index/ (Include a link of the PEGI rating.)

The GRA expand on their PEGI details by saying that the game includes ‘infrequent scenes of violence towards defenceless persons’ including one where ‘a man is tied and beaten across the face by an armed thug’ and another where ‘the player is able to shoot a hostage’. There’s also an interrogation scene where Batman ‘threatens to roll over the man’s head with his Batmobile’. The GRA go on to say that ‘the majority of the game features milder, though still mature, violence with Batman’s reasonably realistic take downs of whole crowds of enemies with powerful hands-on combat. There are also some realistic shootings.’

Gianni Zamo, Communication Officer for GRA, clarified the change from 16 to 18 rating. “The first involves Commissioner Gordon being tied up and beaten across the face by an armed thug. The second moment involves a police sergeant being held hostage by the Riddler.  She is held and grasped around the neck with the gun being held to her head.  Both characters can ultimately be shot.”

8. Themes
The Arkham series has always explored the necessity of a vigilante like Batman in a city like Gotham, plagued by supervillains and corrupt authorities. Batman’s ethical distaste for guns and lethal violence is challenged by the brutal methods of the Arkham Knight, and that character’s secret identity is key to the game’s plot.

9. Why people play:
Arkham Asylum demonstrated that a licensed videogame could provide an authentic Batman experience, giving players the opportunity to wield Batman’s gadgets and extraordinary fighting skills in fluid, empowering action scenes. While the dark, often nihilistic tones of the Arkham games have been criticised in the past, the games undoubtedly provide a compelling version of the Dark Knight and his world tailored to the potential of games. There can be few players who won’t want to see how Rocksteady round out their trilogy of games, if only to be Batman one more time… and get behind the wheel of the Batmobile too.