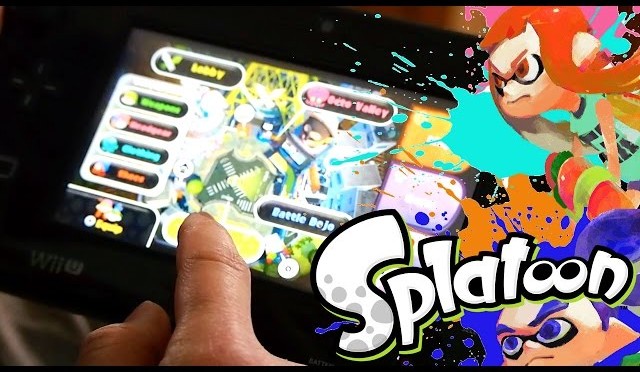 Here’s a look at Splatoon from the Huo family, a dad and two daughters.

Team Multiplayer can only be played online. If you would rather play offline, you can choose from a full and challenging single player Story in Octo Valley, or you can hone your skills against another person in the 1 on 1 mode called Battle Dojo.

In Battle Dojo you battle on the same maps as Turf Battle, but the object is to pop more balloons than your opponent. Popping a balloon is worth 1 point, except during the last 30 seconds of the match where the points are doubled. If you get splatted by your opponent you lose points. The player with the most points at the end of the round wins.

One player uses the GamePad and its built in screen, and the other player uses a controller and plays on the TV. It’s a natural solution to local multiplayer, but it raises a minor issue: only the player with the GamePad can use motion controls for aiming. The player with the controller, has to use the Right stick for aim. Since everyone in the family prefers the motion control, we have to swap after each game to make it fair.

That surprised me actually, that after some practice, I prefer the motion control over traditional right stick control. I almost felt like I should give it a try the way the designers created the game, and there’s a certain logic to it, almost like using a mouse and keyboard. Using the right stick for Left and Right, I found the most success by minimizing the motion control to mainly up and down.

With Splatoon, Nintendo have re-imagined the shooter. They’ve taking the emphasis off eliminating other players and instead you compete to cover the most area. Because moving around is much quicker in your own ink, even when playing to pop balloons you still have to cover the ground with ink.

That’s not to say that you can’t benefit from inking other players, of course. Sending them back to their spawn point means that they’re off the field, while you’re still out there, laying down ink. Speaking of laying it down, Splatoon offers a wide variety of ways to spread ink around the stage, from rapid fire small weapons, long range charging weapons, and ground covering paint rollers. Players are also equipped with sub-weapons, like bombs or beacons, and a special weapon that can only be used once you’ve spread enough ink around – another incentive to focus on spraying ink on the stage rather than taking out opponents.

The kids took to it pretty quickly, after using the Story Mode and Battle Dojo to get comfortable with the controls. After a few days, they were willing to try the online Turf Battle, and they had fun, even though they didn’t always end up winning. As a parent, I’m happy about the decision to leave voice chat out, as it provides a game experience that is free from negativity.

And really, this is a shooter like no other. Even a kid friendly shooter like EA’s Plants vs Zombies Garden Warfare is still about mowing down your enemies. Splatoon’s Single Player Story Mode has some aspects of that, but it also features some puzzle aspects, as well as finding hidden items through each level. And its multiplayer mode is 3 minutes of pure mayhem, so addictive that whenever I got splatted, I just wanted to get back into the fray as quickly as possible.

One thing I did want to highlight was that it is possible to join your friends who are already playing a Turf Battle online. Choosing Join Friends in Regular Battle lets you see who on your friend list is playing at the moment, and jump to their lobby, or wait in line until they are done their match. Nintendo have announced a future mode where you can pick a team of four friends, but the ability to join friends is in the game, from the start.

Nintendo have promised to support the game by adding new multiplayer modes and stages to the game well after its release. Here they seem to be learning from the popularity of ongoing Mario Kart content. And don’t forget the Splatoon amiibo, which unlock more challenge stages and additional gear. It’s clear that they understand in order for a multiplayer shooter to be a success, you need to keep players playing.

Parents often call for strong alternatives to older rated shooters, and here’s a very strong candidate. Splatoon is Nintendo’s answer. It’s a colourful, vibrant game that’s not only fun for young and old, but has an exuberant competitive edge.