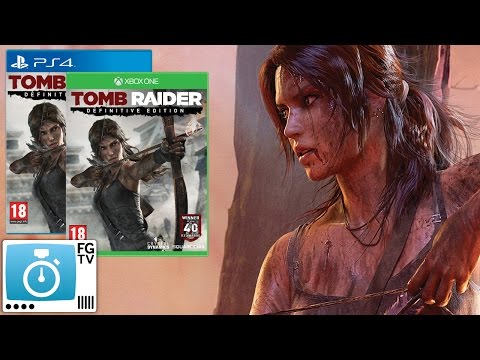 Guide to Tomb Raider Definitive Edition. What makes this game great and what to watch out for here’s the ultimate family guide.

1. Genre
The longstanding Tomb Raider series was rebooted in 2013. This is an action-adventure game in which the player character – Lara Croft – explores various environments, killing enemies. It also has elements in common with role playing games, as Lara levels up and learns new skills.

Playing the game involves exploring an island, progressing through areas that act like levels, sometimes solving environmental puzzles like burning barrels to clear a path, triggering switches, shooting enemies with a bow or variety of guns, and moments where you have to quickly press a series of buttons that appear on screen.

Tomb Raider also has an online multiplayer mode, which has players team up and compete in different modes that often have them trying to kill each other.

This latest Tomb Raider has a lot in common with the Uncharted and Prince of Persia series, both of which involve a similar kind of adventuring, often in far-off lands.

2. Story
This game goes back to the start of Lara Croft’s story. A young Lara is in a shipwreck and ends up on an island inhabited by violent cultists. Her friend is captured, so she sets off to rescue her and try to escape the island, having to make her way through various environments and kill many of the cultists and other enemies along the way.

3. Developer
This reboot was developed by Crystal Dynamics, which didn’t develop the original Tomb Raider. Crystal Dynamics is also working on a sequel, Rise of the Tomb Raider, which is due out later this year and will be released first on Xbox One and Xbox 360.

4. Format
Tomb Raider is available for PC, Mac, PS4, Xbox One, PS3, and 360. Prices range from £15/$20 to £35/$40 depending on platform. The PS4 and Xbox One versions have improved visuals, and the PS4 version makes use of the DualShock 4 controller’s light and speaker.

To play the multiplayer on PS4, Xbox One, or 360, you’ll need a subscription to PlayStation Plus or Xbox Live Gold.

5. Duration and Difficulty
It takes about 12 hours to finish the main story of Tomb Raider, but there are additional tombs to explore and things to collect that will keep players who like that kind of thing busy for a few hours more.

The GRA expands on its PEGI details by explaining that “violence is always realistic with blood and true to life reactions and injuries”, describing an extreme example in which “Lara falls from a zip wire onto some spikes; one of which goes through her torso and the other goes through the bottom of her jaw and through her head.” There is occasional use of the “f” word. The GRA also describes “a scene where Lara has her hands tied and is touched in a potentially sexual manner by her captor”, though states that it “only goes as far as him running his hand down the side of her body before she escapes”.
http://gamesratingauthority.org/pegi/search_aci.html

7. Other Ratings
In the US, the ESRB rates Tomb Raider M for Mature, with content descriptors for Blood and Gore, Drug Reference, Intense Violence, and Strong Language. It describes the violent acts to which Lara can fall victim, e.g. “getting stabbed, beaten, strangled, or shot by enemies”. Other content includes “large blood-splatter effects” and “a demonic lair covered in dismembered human corpses–scattered limbs and pools of blood are prominent”.
http://www.esrb.org/ratings/synopsis.jsp?Certificate=33258&Title=Tomb%20Raider%3A%20Definitive%20Edition&searchkeyword=tomb%20raider

Lobby group Common Sense Media rates Tomb Raider as “not for kids”, stating that this is “the first “Mature”-rated Tomb Raider since the franchise started in 1996”.
https://www.commonsensemedia.org/game-reviews/tomb-raider-definitive-edition

8. Themes
Some players may not be comfortable with the sexual nature of the scene in which Lara kills for the first time, and it may be particularly upsetting to those who’ve experienced sexual assault. Lara’s vulnerability is emphasised, as she is frequently hurt, the effects of which are both visible and audible.

While the game features cultists, it doesn’t explore modern religion. The island is historically interesting, however, as it includes relics from ancient Japan and World War Two.

9. Why people play:
Tomb Raider has a lot to offer: a beautiful world to explore, a story of Lara and her friends to uncover, puzzles to solve, things to collect, and lots of action.

It’s a series popular with those who would like to see more female protagonists in video games. Lara is one of the few well-known examples we have, so it’s good to see her updated for modern players.