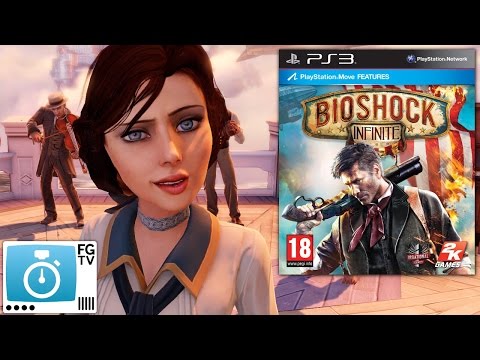 Guide to BioShock Infinite: The Complete Edition. What makes this game great and what to watch out for.

1. Genre
BioShock Infinite is a game in which you do a lot of shooting played from a first-person perspective, as if through the eyes of the main character Booker.

You kill hundreds of human enemies, with various guns and/or magical attacks called Vigors. These enable you to do supernatural things like conjure a swarm of murderous crows or possess machinery like motorised enemies.

For most of the game you’re accompanied by another character called Elizabeth who can find you extra ammo and other resources. BioShock Infinite: The Complete Edition includes additional story content called Burial at Sea that lets you play as Elizabeth.

2. Story
Infinite takes place in a fictional city in the sky called Columbia, in 1912. The city is a scientific marvel and looks beautiful, a supposed utopia run by a religious leader called Comstock. As Booker, you are sent to Columbia to retrieve a young woman called Elizabeth, who is locked in a tower. Along the way, you face lots of opposition and quickly discover the city is actually a dystopia characterised by racism and elitism. As you learn about Columbia you also learn about Comstock, Elizabeth, and Booker himself.

3. Developer
Developer Irrational Games also developed the original BioShock, though not BioShock 2, as well as older games like System Shock 2.

5. Duration and Difficulty
It should take around 12 hours to finish the main story in BioShock Infinite, though it could take twice as long for players who want to collect everything.

There are multiple difficulty options, so players of a range of abilities should be able to enjoy it.

6. UK Rating
In the UK and Europe, PEGI rates BioShock Infinite: The Complete Edition as only appropriate for those aged 18 and older, for “extreme violence”, “violence towards defenceless people”, “strong language”, and “content that teaches or encourages gambling”.

The GRA expands on its PEGI details by explaining that the “Gross violence includes graphic burning of enemies, decapitation, the use of a gun which microwaves enemies, causing them to explode in a cloud of blood, or impalement on a rotating drill.”

The Burial at Sea DLC specifically contains “an instance in which avgirl is restrained and has an ice pick inserted into her eye socket”. The game contains “offensive and discriminatory language” to do with race, and “mild swearing” including the “f” and “s” words. The DLC also alludes to “disturbing issues such as human trafficking and child abuse”.
http://gamesratingauthority.org/pegi/search_aci.html

7. Other Ratings
In the US, the ESRB rates BioShock Infinite M for Mature, with content descriptors for Blood and Gore, Intense Violence, Language, Mild Sexual Themes, and Use of Alcohol and Tobacco. The ESRB also points out “suggestive/sexual dialogue”, like the line “Could use a good roll in the hay after this”.
http://www.esrb.org/ratings/synopsis.jsp?Certificate=32765&Title=BioShock%20Infinite

8. Themes
BioShock Infinite is more thought-provoking than other shooters. It raises issues to do with racism and religious extremism, though some argue it fails to address them in a satisfactory way. It also raises philosophical questions to do with personal identity, and the game’s ending could provoke much discussion.

Despite the large amounts of violence in the game, it also works hard to establish strong relationships between different characters, not only the main character and his companion but other characters in the narrative too, like the religious leader Comstock, Elizabeth’s mechanical protector Songbird, and the mysterious Lutece twins.

9. Why people play:
Like the previous BioShock games, Infinite feels good to play but people are also attracted to the story and characters. In this case, the main character’s companion Elizabeth was popular with players as she felt more developed than female characters in other games. Although controlled entirely by AI, players often found themselves caring about what happened to her. Given that the DLC extension lets you play as Elizabeth herself, those interested should opt for the Complete Edition of the game.