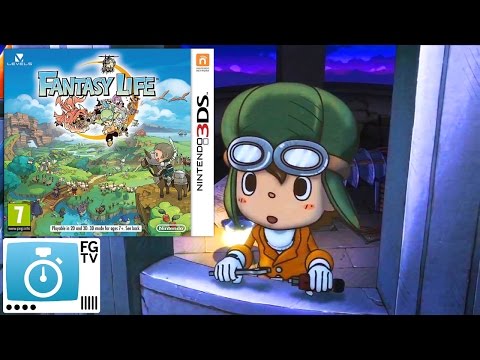 Welcome to our tips on Fantasy Life, from what makes this game great to what to watch out for here’s the ultimate 2 minute guide.

Fantasy Life is a role-playing game with all of the typical characteristics that implies: you carry out quests, fight enemies, and gain experience and skills as you progress. What’s different is that you can switch between twelve different Lives, which function as careers within that fantasy setting.

“Lives” fit into three categories: resource gatherers like Miners, goods producers like Blacksmiths, and fighters like Mercenaries. You improve certain skills faster when playing as the relevant Life, but you can switch Life throughout the game, and your experience and items carry across.

A main quest has you investigate a mysterious threat facing the land of Reveria, but each “Life” has its own unique side quests.

You can also help people and earn money to buy things for your house or houses, and you can have a friend or friends visit your world, which all gives the game a bit of an Animal Crossing feel.

Developer Level-5 is perhaps most famous for the Professor Layton games, though it’s also the studio behind the football RPG series Inazuma Eleven.

Fantasy Life is only available on 3DS.

It takes around 12 hours to get through Fantasy Life’s main story, but there are enough side quests and things to collect that you could easily play for dozens of hours more.

PEGI rates Fantasy Life as a 7+, with a content descriptor for “non realistic looking violence towards fantasy characters – Violence that is set in a cartoon, slapstick or child like setting that could be upsetting to very young children”.
http://www.pegi.info/en/index/global_id/505/?searchString=fantasy+life&send=Search

The Games Rating Authority expands on its PEGI rating by describing some of that non-realistic violence, saying that it’s “typical for the genre”, in that “striking characters will cause an often small effect, with SFX and displaying the HP loss of that particular character. When characters are defeated, they fall down and disappear. Next to fantasy characters there is also violence against human characters” who “voice a pain screech and fall to the ground.”

In the US, the ESRB rates Fantasy Life as E for Everyone 10+, with Content Descriptors for Comic Mischief, Fantasy Violence, Mild Suggestive Themes, and Use of Alcohol. “Mildly suggestive material” in the dialogue that includes lines like “Who’s this? One of my husband’s little two-timers in training?” The “Use of Alcohol” refers to a drink called “barley juice” in the game, that seems to make characters drunk.

Common Sense Media recommends Fantasy Life for those aged 10 and older, stating that while some of the Lives “involve mild violence” most involve mostly “chatting, foraging, and crafting as players diligently perform their virtual jobs, fulfilling a nearly endless stream of requests from their mentors and random citizens.”
https://www.commonsensemedia.org/game-reviews/fantasy-life

Though the story is about a mysterious threat, Fantasy Life is far from dark. Bad guys turn out to be lovable misguided rogues, disagreements between characters are resolved amicably, and your talking butterfly companion is motivated by a desire to see everyone get their heart’s desire. There is combat, but no blood, and it can often be avoided if you’d rather spend your time fishing or making clothes.

Conversation with other characters in the game seems to suggest that it’s only having a Life that’s important, rather than what particular Life you choose.

Fantasy Life is pretty uncomplicated as far as role-playing games go. It has stats and items, but it’s simple to understand and play. Although sweet, the story isn’t particularly deep, and the side quests tend to just be simple fetch quests, but they’re really just an excuse to spend more time in the beautiful world of Reveria, gathering up enough Dosh to buy and furnish a house, or enough Bliss to unlock the ability to have a pet that can come with you on your adventures.

It’s not much of a challenge but keeps you going with its extremely polished production. It might not satisfy long-time RPG fans, but for those looking for a light, charming distraction to keep them occupied on the commute (or school bus) it’s perfect.