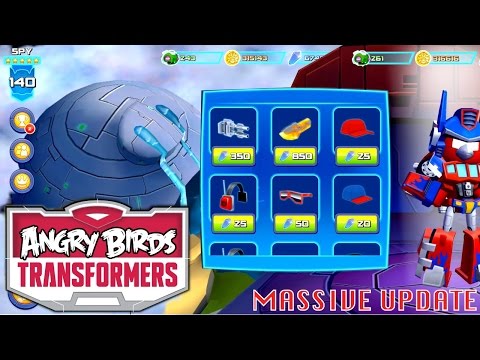 t’s been a few months now since Angry Birds Transformers hit appstores worldwide with the promise of future updates to come. The first of those, The Deceptihogs Revenge, has now landed, bringing with it some major changes and improvements to the game. At it’s core, the run and gun gameplay hasn’t changed, but there are some new additions in terms of new environments and new level components to mix things up. Some of the more advanced characters like Ultimate Megatron and Optimus Prime now fight on more complex levels which include speed up and slow down portals with players being advised that these should test their skills more, but come with greater rewards.

Outside of the actual levels, the main map has been updated with new areas, some of which are only unlockable when the player reaches a rank 150. Others look like they’re either free to unlock or require lower ranks to unlock. We’re at rank 140 at the moment, so those areas were free for us. Inside those new areas are new characters to unlock, including Brawl and Thundercracker. Bonus events can also be found on the map, the first of which gives players access to a new variant, Grey Slam Grimlock.

Along with new characters, players can now customise their characters with various accessories, everything from sunglasses to power swords. All of these can be bought with gems earned in the game, but some items are more expensive than others. Each character is also now part of a squad, collecting each character from a squad leads to further bonuses on levels when those characters are deployed:

Much like with other Angry Birds games, Rovio have also introduced a super ability to help you get through trickier levels. You can now deploy Skywarp up to three times to help you progress. Of course there are always in-app purchases to help you too, but it’s worth noting that previous price changes in Europe mean that these are even more expensive now than before. The top IAP has bumped up from £69.99 to £79.99 and even that won’t stretch that far.