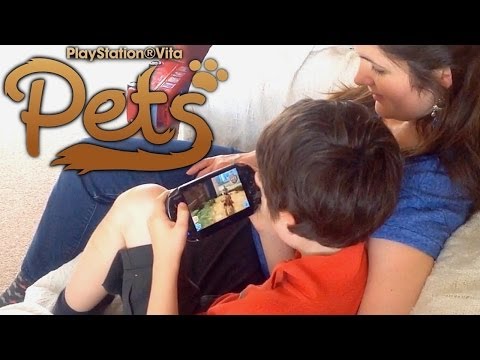 PlayStation Vita Pets unavoidably goes toe-to-toe with the 3DS’ Nintendogs but it comes away smelling of roses rather than wet fur. It works as a all-round pet simulator but with the added bonus of a campaign mode that neatly fuses many of its simulation aspects into a nicely paced story.

You’ll be picking your new canine friend the first moment you step into the game from a selection of four different breeds (each with different voices). From here it’s back to your home where you’ll get to know your dog and how to earn buddy points and money with various activities.

This should all be pretty familiar to anyone who’s played Nintendogs as you can teach your friend new tricks and later combine them into a trick game. The usual petting or playing ball or tug toy games build up your points to unlock more items in the shop but certain skills also level up – giving Pets a much deeper and meaningful sense of gameplay.

It’s this sense of progression that my kids loved the most about Pets. Sure, you can get into dressing up your dog in a variety of cool and not-so-cool clothes but levelling up sniffing skills, tug abilities and jumps really appealed my kids game-playing style.

These skills aren’t just for show either because the best part of the game comes with its campaign quest to uncover what happened to King Rufus and his loyal hound. It’s a fairly lightweight tale but carries with it enough fairy-tale charm and boys-own adventure spirit to engage and entertain. Oddly enough I was reminded of the link between the hero and his dog in Fable 2 – and Pets gave me that same kind of friendship towards a virtual dog when going through this campaign – something I really wasn’t expecting.

There’s a fair dose of woodland exploration to go with this campaign that sees you uncovering old statues, digging for clues or treasure and using your skills, tricks and abilities to unlock further parts of the map.

On its own this would be enough to keep us engaged but the inclusion of some virtual reality camera features and voice & facial recognition tech really made that connection between the player and the dog a meaningful one.

It also did a good job of teaching my kids that dogs and pets in general need looking after – an issue that’s always hard to get through to kids. Keeping our dog fed, washed and happy was done with the right balance, enough playfulness and visual cues to make it seem more fun and less preachy.

And those visuals! Oh boy, the Vita really shines with the variety of atmospheric environment you’re going to be exploring. But the real winner is the animation of the dogs that are so spot on it’s impossible not to feel a connection with them.

All that keeps Vita Pets from top marks is an issue of guidance at certain points. Sometimes it’s overbearing in telling you what to do and at other times, like finding out how to teach your dog how to jump, was very frustrating. These felt like an unnecessary road bumps in an otherwise extremely pleasant journey.

So does Playstation Vita Pets take the pet simulator crown away from Nintendogs? Well, I think so. While Nintendo’s franchise is a glorified sandbox, Vita Pets actually offers a story to go with the dressing up and games you’d expect as standard. Not only that but it weaves the two together creating a game that I, a self confessed cat lover, actually wanted to play and finish.

If you’ve got kids that grown bored of Nintendogs or simply want a virtual experience of owning a puppy then playstation Vita Pets is an awesome experience and I can’t wait to see the next steps it’ll take.

More from the Standing family on http://www.soulfulgamer.com,
@TheReddishBeard and you can add Adam and his son as a friend on Playstation Network then send a request to the username – Adamfast. Content supported by Sony, including access to the game.