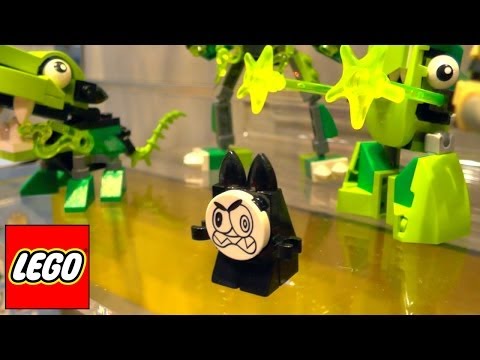 Mixels stand out in Lego’s Toy Fair line-up as the most exciting, and biggest risk, for the brick company this year. It’s a new franchise that relies on the simultaneously launched collectable Lego toys and Cartoon Network show catching on fast.

If a future civilization excavate our long-buried cities to find a child’s Lego collection they will not only discover a popular historic toy but a lens through which to see all manner of other entertainment products.

Having a spin-off Lego kit is a right of passage for everything from blockbuster movies and classic TV Shows (which in turn have their spin-off video-games).

With this in mind it’s no surprise to find press and retailers clamoring for access to Lego’s launch of their 2014 kits at New York Toy Fair last week. I was granted access behind closed doors to get a tour of the booth.

Most interesting this year is their Mixels range of toys. Although this isn’t just a toy-line, it’s a cross media entertainment offering with partner Cartoon Network. Launching physically and virtually at the same time positions the franchise as an entertainment rather than toy product.

A big plus here is that they aren’t going to be sold in foil blind packs so children can avoid getting doubles — unlike its collectible minifig range.

With Lego Minifigures Online taking this idea further this year (a toy-game cross over like Skylanders) it will be interesting to see how consumers, viewers and players respond to the new ambitious direction from the Billund based brick masters.