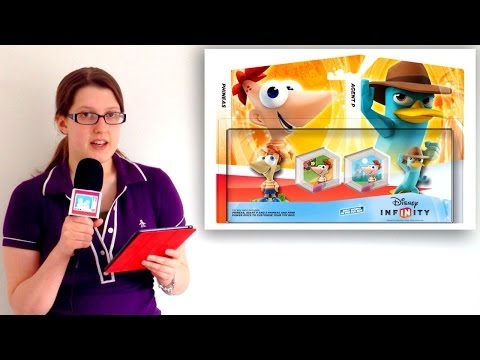 Disney Infinity: Andy went to the New York Toy Fair last week, and one particularly cool thing he got to play with was a new Toy Box Pack for Disney Infinity. The Phineas and Ferb pack doesn’t actually include Ferb, but consists of Phineas and Agent P, which fans will know is the codename of popular character Perry the Platypus.

Also coming to Disney Infinity are some new power discs — Series 3 — which Andy got to have a see at the New York Toy Fair. They include a Rapunzel disc that boosts your character’s health, a fireworks cannon from Mulan, and a rare fire extinguisher jetpack-style disc from Wall-E.

Skylanders: Activision wasn’t ready to talk about the next Skylanders game at the New York Toy Fair as they have in previous games, but they have confirmed that a new game is coming and that they’ll properly announce it later on this year. Andy did, however, get hands-on time with some new figurines including the Wave 4 figurines Trap Shadow and Freeze Blade, and Springtime Trigger Happy.

Retailer Mega Bloks had merchandise at the New York Toy Fair that could be something to do with the unannounced next Skylanders game, since retailers showcase unreleased products at the fair, but Activision wouldn’t comment on the speculation.

The figurines looked like a golden lion, a robot-like figurine, an orange figurine with a horned helmet, and a blue figurine with a dragon-like head. All figurines were holding some kind of crystalline weapons or shields, suggesting those may play an important role in the next game. Could they be swappable?

Minecraft: In a recent blog post, Daniel Kaplan has said that the Minecraft: Pocket Edition team is working on changing the code of the game to allow “significantly bigger worlds” in future, as well as updating the AI, inventory, and more. From the screenshot in the blog post, it looks like we’ll also be getting dogs. Unfortunately, while all this work goes on the Pocket Realms beta will be shut down on the 1st of March, to be reopened later this year.

NEWS
Microsoft has lowered the retail price of the Xbox One in the UK. If you were thinking of buying one, wait a few days until the 28th of February and you’ll be able to get it for £399 instead of £429. Worldwide, Microsoft is also introducing a Titanfall bundle — you get the Xbox One, a digital copy of the multiplayer shooter, and a free month of Xbox Live Gold all for the same price as the console alone.

Rovio has announced a new Angry Birds brand called Angry Birds Stella, which focuses on the pink, female bird Stella. There’ll be games, cartoons, books, toys, and more to tell stories about Stella and her friends (and, apparently, “(fr)enemie”s). The tagline? “Best friends forever… most of the time”. Andy got to see figurines of some of the new characters at the New York Toy Fair.

Nintendo recently broadcast one of its Nintendo Direct presentations. Among some release dates, we also learned that Mario Kart 8 will let you race as each of Bowser’s seven Koopaling minions, and that we’ll be getting a new Pokemon puzzle game for 3DS called Pokemon Link Battle.


One Twitch user has created some code that lets thousands of players try to play the same game of Pokemon Red at the same time. Players can see a video that shows the emulation of the game, and type commands into the chat at the side. The code finds appropriate commands, which are those that correspond to buttons on a Game Boy like left, right, a, b, start, etc., and inputs them into the game. As you might predict, with thousands of people playing the game is not going smoothly, but the players have managed to beat a few gym leaders.
http://www.twitch.tv/twitchplayspokemon