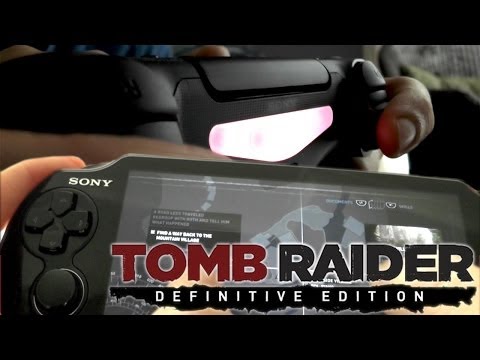 Tomb Raider is Definitive on PlayStation 4, with game changing use of controller lights, speaker, Vita remote play and all this at 60 frames per second.

On the Xbox One there is Kinect enabled voice commands for skills, maps, and relic menus, as well as commands to switch ammo types. You can also use the camera controller to “lean” during some in-game fixed scenes and get an alternative view of the action. Finally, you can use the camera for gesture control for manipulating any relics you discover.

All well and good, and nice to see Crystal Dynamics making use of the new features — although it must be said that most of these will be ignored by the majority of Tomb Raider Definitive players.

Over on the PlayStation 4 however the enhancements are more interesting. As well as matching the voice and gesture controls of the Xbox One there are four additional reasons why it’s on PlayStation that Tomb Raider is really definitive.

1. PS4 at 1080p 60 Frames Per Second
Before getting to those new interactions we hit the first edge the PS4 offers: delivering all that graphical gravy at around 60 frames per second whereas the Xbox One is reportedly settling for 30 frames per second. Now, much could be made of this as a distinguishing feature but to quibble too much is to miss the fact that both games look excellent and even side by side you’d be hard pushed to tell the frame rate differences.

2. PS4 Controller Light
The light on the PlayStation 4 Dual Shock controller has not always been a gamer’s best friend, with Sony often finding themselves defending its existence and the inability to turn it off. In Tomb Raider Definitive edition however this feature really comes to life. This is where the PlayStation 4 starts to edged ahead.

Firstly it offers an additional warning when Lara is low on health, turning from Blue to Red as she gets near to death. But it’s also used for other environmental affects as well. Light a torch and suddenly the controller throws red-orange flame colored hues into the room around you using the controller lights. Shoot particular weapons and you are gifted with a real-world flash of light as you let rip.

3. PS4 Controller Speaker
As a fan of the original Wii Remote’s inclusion of a speaker, I was enthusiastic about its inclusion in the Dual Shock 4. This opens the door for all kinds of new ways of interacting with the game.

In Tomb Raider the speaker picks up particular sounds and brings them right up to the player. Having the device in your hands emit noises like this not only rounds out the experience but creates a different feel to the game. Firing a weapons is now an audible sensation as well as a visual one.

4. PS4 Vita Remote Play
It’s easy to overlook how significant the Remote Play feature is for the PlayStation 4. Not only does it mean you can now play Tomb Raider on the go over the internet, but is also enables you to free up the main screen at home for other members of the family to use.

5. PS Vita Tomb Raider Touch Controls
As well as the Vita letting you play Tomb Raider on the go, like other Remote Play experiences Tomb Raider does some leg work to map the Dual Shock buttons to the smaller sticks and triggers. The three left/right triggers fall to the Vita buttons and rear screen while the r2/l2 are easily accessible on the top of the touch screen.

Conclusion
While much has been made of frame rates and resolutions in the early stages of the console war, we will soon move beyond these visual comparisons to be more concerned with the interactions and game-play made possible by both the PS4 and Xbox One.

On this count, the controller lights, sound and Vita’s remote play make the Tomb Raider Definitive experience much more substantial and game changing on Sony’s console.

It will be interesting to see how Uncharted 4 responds to this high definition rendering of Tomb Raider, and what use it makes of the new PlayStation 4 Dual Shock controller along with potential Vita cross-over. It also seems not out of the question to expect an Uncharted Definitive Collection on PlayStation 4 before too long.

It will also be telling to see how the Xbox One continues to leverage the Kinect controller (and game-pad enhancements like eight player support and impulse triggers) in core titles as well as the innovative ways developers put to use the (so far) under-used and under-rated interaction for core game experiences.

Also our sneak peak of the landscape and characters of Uncharted 4: