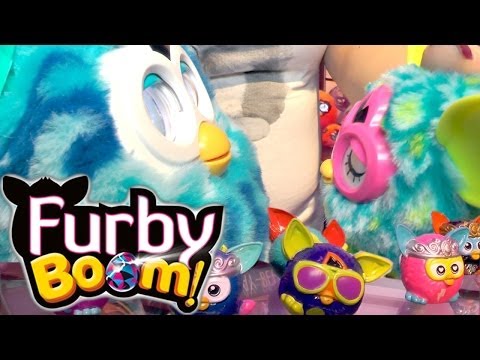 Head of the field for capturing the hearts and minds of our young people is Furby. A long a prestigious history means there is more to these furry virtual pets than meets the eyes. Last year saw the arrival of Furby Boom to much acclaim which took the usual Furby play pattern and extended it to an interactive iPad game.

At Toy Fair this year Furby not only had some new colors and outfits but a couple of new additions to the range. Mini Furblings are (relatively) cheap collectable plastic Furbies with a twist. They are miniature (admittedly adorable) Furbies not unlike the Telepods in size and shape that unlock a digital version of themselves in the app by scanning a QR code with the Tablet or Smart Phone camera.

While this is a nice addition for a pocket money priced Furby product crossing over virtual and physical assets like this can be confusing for families. As we’ve seen in Angry Birds Go! that allows players to buy either physical or virtual versions of characters it can become confusing exactly what you are getting for your money (that you couldn’t get cheaper elsewhere, or perhaps even earn for free by playing).

Happily it seems that the Mini Furblings unlock creatures in the Furby Boom app that couldn’t be access in other ways. Even so Hasbro have their work cut out to communicate the intricacies of this transaction to parents and children.

Keeping the Mini Furblings company on store shelves this year are a set of half sized Furby Furblings. These also can be scanned into the app to unlock an exclusive version of themselves to play with virtually. But here the real excitement is in how they interact with the full size Furby Boom. A little like the Furby Party Rockers (are you keeping up?) they respond to the big Furbies by talking, playing and even singing.