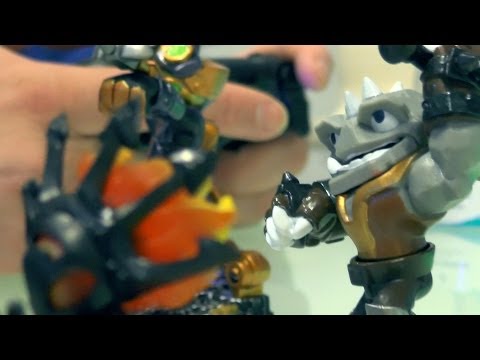 As the New York Toy Fair draws to a close we take a look at the Skylanders news from this years convention as well as the speculation around the new game. Although no hard details were forthcoming this year, unlike previous events where Activision announced a new title in full, there was plenty to read between the lines of.

Reflecting on not only the image-less leaks from the Mega Blocks merchandise, but also news from the Skylanders stand itself, there was plenty to mull over. There was also more revealed about Wave 4 Skylanders figures for Swap Force. We had hands on with these new characters for the existing game as well as a close up look of the packaging for the Easter specials.

Along with the expectation of a bold new direction for Skylanders, under pressure from not only Disney Infinity but also new comers like Rovio’s Angry Bird Telepods games, we can expect firm details to be forthcoming later in the year.

We also get up close with this year’s special Toy Fair exclusive figure, the metallic red Dune Bug figure. Unlike the previous trend in colour-shift characters this is an all metallic figure that offers additional benefits in the game itself.

Although this year’s New York Toy Fair may not have delivered the big punches in terms of hard news for Skylanders fans there was still a real buzz of excitement and anticipation to see how the toys-to-life video-game category developers from here. Skylanders Zoom anyone?