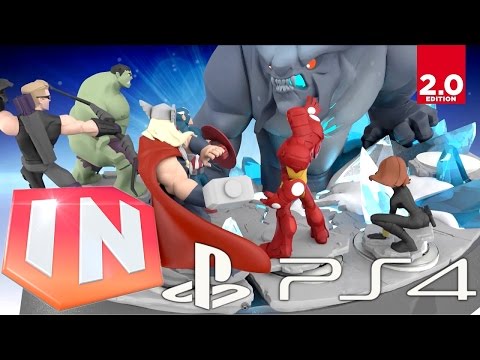 San Diego Comic Con 2014 has arrived and with Marvel and Disney Infinity a big presence at the show. We have direct capture footage from the new playset.

Pre-show we got our first official confirmation and closeup look at The Guardians Of The Galaxy. Check out our previous videos from Andy’s recent visit to Brighton based Studio Gobo for a good look at the figures and some early play-throughs of the playset.

Today though, we’ve got a selection of new content for you. First up is some extended gameplay footage of the Guardians, followed by The Avengers and Spider-man. We get to see each of the characters from those playsets in greater detail, including our first decent look at The HULK in action. The gameplay also reveals the presence of cross-over coins, which are the currency required to unlock the ability to play as cross-over characters in the various playsets and confirms that Iron Man and Nova will be playable in the Guardians Of The Galaxy playset.

Following on from the character profiles, we get another look at the Toy Box as we see some of the new features coming to Disney Infinity 2.0 once again. Most significant of those is the “Escape from Kyln” Toy Box Game, which takes place in a familiar Guardians Of the Galaxy location, providing a dungeon crawl style game for all characters (including Disney Originals) to participate in. We also get to see a possible platform based Toy Box Game, the interior design tools for Toy Box buildings, along with the creators and builders; which make constructing your Toy Box that little bit easier.

After the tease at the Sony E3 press conference, we also get a close look at the Playstation Exclusive Collectors Edition of Disney Infinity 2.0 Marvel Superheroes. This edition features the full Avengers Playset roster of characters, including The HULK ahead of that characters official release. The most striking aspect of the collectors edition is the light up diorama, on which you can pose your Avengers figurines ready to take down the mammoth beast towering over them. Along with that reveal, John Viognocchi also gave us a sneaky look at a possible Loki figurine.

That’s not all though, we’ll talk you through the Guardians of the Galaxy Playset trailer and discuss a few of the features you get in the playset, looking at Gamora’s Space Armour costume disc in action.

Finally, moving on from Guardians Of The Galaxy, we have the first image of the Disney Infinity version of Baymax, HULK weilding the Gravity Falls Kitty Fists and absolute final confirmation (if we needed it) of the release date being September 23rd.