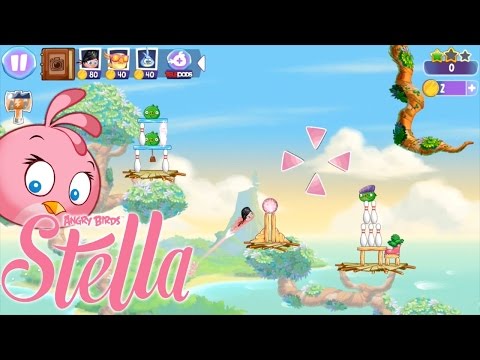 We have a look at the first three worlds from Angry Birds Stella along with in app purchases of both Telepods, Coins and Stars.

As you can see from the video there is plenty of projectile game-play for players of all ages and genders.

Along side this there seems to be more puzzle solving here with players traversing through the environment as much as knocking down the Piggies.

We also have a look at the Telepod toys that go along with the game to get a sense of how the two will work together. Certainly Angry Birds Stella is shaping up to be a solid release for all players — not just girls. Even if it is a bit pink.

Official Blurb: “Stella – the fiercest and feistiest of the Angry Birds – has moved to Golden Island to join up with her best friends Dahlia, Poppy, Willow and Luca! Now this fearless flock will live together in the Big Tree, and explore, create, rock out and laugh… a lot!

Each of these birds has a strong personality, so they don’t always see eye to eye. But just like any strong friendship, they make up in the end. At least most of the time…

Gale used to be best friends with Stella, but when their friendship fell apart, Gale went down a darker path – and even has some Minion Pigs under her command.

This whole new Angry Birds adventure starts soon, so take a look below at just some of the exciting stuff on the way!”