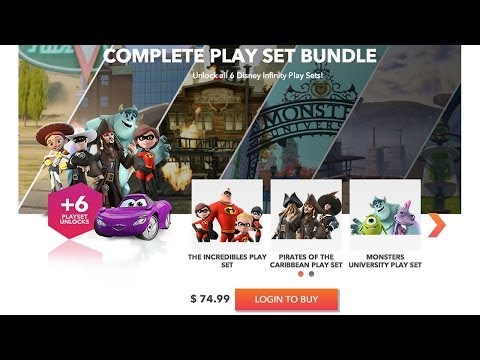 Disney today announced that the PC version of Disney Infinity will now offer full access to the Play Sets as well as the Toy Box mode.

Previously the PC version of the game only supported Toy Box play, in much the same way as the iPad app. Now, players can purchase Play Sets and figures via the virtual store to access all the features of the console game — and at a fraction of the cost.

If players already have figures and playsets they can use the related code to access to content for free on the PC. For those that don’t have it on console though, these virtual versions of figures, play sets and power discs offer some great value.

This also grants collectors access to those hard to find Crystal figures in some of the bundles, as well as offer a simple way to buy everything in one go and know you have the complete experience.

It will be interesting to see how sales of this Disney Infinity PC version go. It essentially tests how important the physical toys are to players. Will they prefer to access content without the toy at a greatly reduced price or will they stick with the collect-ability of a physical product on the shelf.

With the iPad version of Disney Infinity previously mirroring the PC functionality it seems likely that a similar move on tablets may be an option for Disney Interactive. Certainly this opening up of not only the Toy Box but all those Play Sets and figures as well would be a strong tactical move.

As we have seen with Angry Birds Go! however, balancing value between virtual and physical routes to purchasing in-app/in-game content is tricky. Not only do you have to balance the price to offset the absence of a physical toy you also need to communicate that clearly to parents and children.