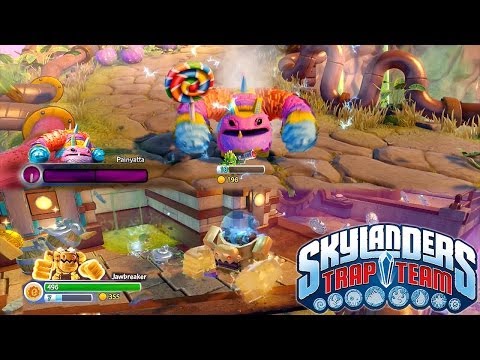 More about how the villains and Skylanders work together revealed here. Each villain is super powerful so has a time limit on how long they can be used before needing to recharge.

You can upgrade the villains by finding a specific hidden quest in the game that when completed you get a new upgrade attack. This should add some good longevity to the game.

In multi-player only one player can switch into the villain in a turn taking mode.

Lock Master challenges and Skystones (check out our next video for Skystones Smash) are both back. The Lock Puzzles now work in two-player and single player mode. The goblins now fly around rather than just fall when tilted.

Food Fight from the launch event is an artichoke with a tomato gun.

TRAP MASTERS
Jawbreaker is a new tech Trap Master with a unique traptanium hammer fists. He can punch and stomp attack. He can also power up his gears to double speed in turbo mode. This then gives him a whole set of super moves.

VILLAINS
Buzzer Beak is a new Air villain we revealed yesterday. He has a propeller hat to fly and attack and performs a swoop smash attack.

Broccoli Guy is a new Life villain with a vegetable theme. He can place a healing glyph on the ground to heal other Skylanders, ideal in multi-player co-op.

Painyatta is a new Magic element villain, and looks really good. So good in fact that we really want a figure sculpt of him. He has various candy attacks. He has a lollipop sucker attack and a candy barf fart attack. He can also barf small Pinyata that then explode.

Wolfgang is an Undead werwolf villain that has various music related attacks. He has a harp guitar note attack and a knee stage slide attack to make quick work of enemies.