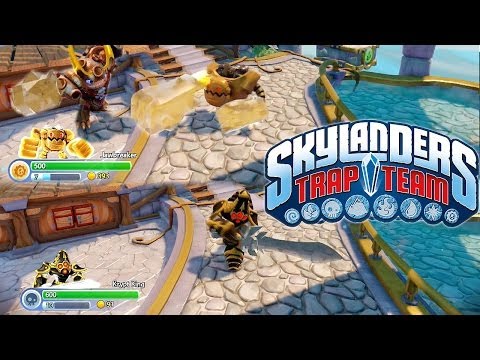 We look at each and every Skylander character at E3 2014.

Krypt King is an Undead Element Trap Master. “I’ve got the edge.” He has a huge sword attack that can sweep in different directions. The sword can also leave his hands to attack enemies at range.

Jawbreaker is a Tech Element Trap Master. “Down for the count.” He attacks with his huge traptanium fists. As well as a variety of punches and ground slams. He can also double his movement and attack with a power up energy boost.

Snap Shot is a Water Trap Master. “Croc and roll.” He has his ranged bow and arrow attacks in different multiples. The bow also has a charge up sword attack that inflicts big damage.

Wildfire is a Fire Trap Master. “Bringing the heat.” He has shield combos and push and spin attacks. He also has a fire breath attach and a claw grab that pulls enemies in for a final blow.

Wollop is a Earth Trap Master. “” He has his hammer downward pound damage. Mash the button fast enough and you get a frenzied blitz attack. The hammers can also be thrown at enemies or used to attack from above as grenades.

Gear Shift is a female Tech Trap Master. She has a big gear that can be used in different attacks. These shift attacks enable her to quickly move between close and ranged combat.

Torch is a Fire Element Core Skylander. She is a blacksmith who uses her bellows as a flame thrower. She also has a fire-hair whip attack and horseshoe ranged assault.

Chopper is a Tech Element Core Skylander. He can run fast and fly to avoid obstacles. In the air he can attack with rockets. He also has a helicopter blade attack and a roar attack to deafen enemies.

Food Fight is a Life Element Core Skylanders. He has a cannon to launch tomatoes and zucchini launcher as well. Then he can lay explosive artichokes.