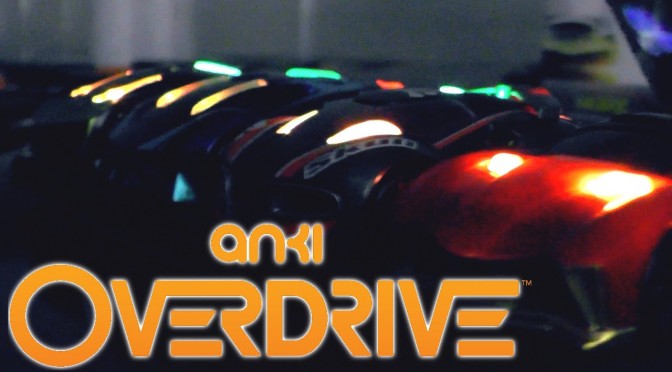 A close look at the game-play and hands-on feel of Anki Overdrive.

Official blurb:
Battle-racing shifts into high gear this fall. Anki – pioneers of entertainment robotics – today announced Anki OVERDRIVE is launching in September 2015 in the U.S., U.K., and Germany. Following the massive success of Anki DRIVE, one of the hottest products of 2014, Anki OVERDRIVE takes the groundbreaking battle-race experience in a new direction with state-of-the-art modular tracks, high-end car designs and new innovations in gameplay. Players can build their own battle-race courses within seconds and pit their real-life robotic supercars against their friends or step up against enemy AI commanders and their crews in the game’s campaign mode. Toy Fair 2015 will be the first chance to get hands-on experience with Anki OVERDRIVE at the Anki booth #3054.

“Anki Drive represented more than a new product launch for us but a key step in a new industry still in its infancy, and an opportunity to make robotics and artificial intelligence accessible in our everyday lives,” said Boris Sofman, Anki founder and CEO. “With Anki OVERDRIVE, we’re able to deliver a new form of play that brings an unprecedented level of customisation, character personality and interaction to life in a physical game, establishing a new category of entertainment at the intersection of videogames, toys and robotics.”

The game also lets players build their own battlefields for all-out vehicular mayhem. The track pieces easily snap together via magnetic connectors allowing players to create and race on their own customised courses instantly. The modular track pieces use special ink and optics technologies to embed information that the high-tech vehicles scan 500 times per second to understand their position and steer precisely on any track configuration.

At launch, the Anki OVERDRIVE Starter Kit will include two highly detailed supercars, 10 separate track pieces, a four-car charger, two risers and a tire cleaning kit. An additional two expansion cars and eight expansion track packs will be available for purchase allowing for nearly limitless track construction. Adding one expansion track pack like the Speed Kit or Corner Kit can expand the Starter Kit from eight possible track configurations to more than 20.

Expansions track packs include:
o Launch Kit – Reach for the sky with jumps on the battlefield. Launch ahead, nail the landing, and smoke the competition.
o Collision Kit – Race into a lethal intersection, pick off your opponents as they speed past or take a short cut to chase them down. Watch out for devastating collisions and don’t get caught in the crossfire.
o 180° Kit – Snap this U-turn piece to any track section and open up the battlefield for head-to-head combat. Build open circuit tracks to face down enemies, unlock longer courses and bi-directional racing.
o Speed Kit – Put the hammer down and outrun opponents or take aim and knock out the competition on these long straightaways.
o Corner Kit – Take these turns at top speed. Or blast opponents before they disappear around the bend.
o Rails Kit – Slingshot into straightaways or drive the fight into corners. Guardrails ensure the chaos of battle stays on the tracks.
o Elevation Kit – Take the battle to another level. Open up crazy track possibilities with hills, bridges, underpasses and more.
o Bank Turn Kit – Race around corners at faster speeds and pull some serious G-forces.

The Anki OVERDRIVE Starter Kit retails at $150. The mobile app is free to download and available for both iOS and Android devices. Expansion track packs and accessories vary between US $10.00 – $30.00 per pack. Anki OVERDRIVE is backwards compatible, allowing Anki DRIVE cars to race on the Anki OVERDRIVE modular tracks.