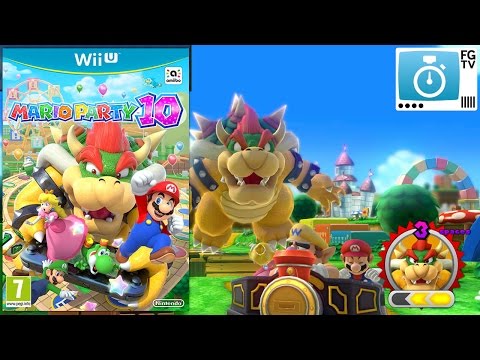 Family guide to Mario Party 10, from what makes this game great to what to watch out for this is the ultimate 2 minute guide:

Mario Party 10 is a multi-player party game for the Wii U featuring various characters typically found in the Mario World series. Luigi, Princess Peach and the rest of Mario’s friends (and foes) can be chosen to represent the player in one of three different modes of play, Mario Party, Bowser Party and amiibo Party. Central to each is a dice rolling digital board game, with up to four players competing against each other. To earn dice rolls players compete in a variety of interstitial mini-games.

Bowser Party mode adds a fifth player in the role of Bowser, trying to thwart attempts to get round the board. Bowser is controlled via the Wii U Gamepad, with the remaining four players controlling their characters via a Wii Remote.

amiibo Party mode enables players to import amiibo characters into the game. This also introduces new character power ups, items and rules. Players can store a token on their amiibo figurine that allows them to use one of a variety of special powers within the game.

As a purely multi-player game, it’s worth noting that Mario Party 10 only supports local multiplayer, there are no online components.

2. Story
As a competitive multiplayer game, there is no overarching story to support the gameplay.

3. Developer
Mario Party 10 is made by Nintendo, developers of Mario and Donkey Kong as well as many more critically acclaimed games.

4. Format
The game works on the Wii U and costs £34.99 in the UK and $49.99 in the US. An additional version of the game comes bundled with a Mario amiibo, but for those who want the ultimate collection, a Super Mario bundle is available that contains the Mario, Peach, Yoshi, Luigi, Toad and Bowser amiibos in all new poses. Owner’s of Captain Toad Treasure Tracker may be interested to know that the Toad amiibo also unlocks new content in that game.

5. Duration and Difficulty
As a purely multi-player game, Mario Party 10 provides endless amounts of gameplay. The 70 included mini-games keep the action fresh, while also providing a variety of challenges for all ages.

6. UK Rating
In the UK and Europe, PEGI rates Mario Party 10 as a 7+, stating that the content of the game is suitable for all people, with a warning that it does contain violence that is set in a cartoon, slapstick or child like setting.

7. Themes
Mario Party 10 is all about slapstick competitive fun in a home environment, encouraging family and friends of all ages to play together face to face.

8. Why people play
The Mario Party franchise is now in it’s 10th iteration and continues to be one of those rare games that anyone can pick up and play. There are few if any barriers to entry and plenty of fun to be had playing over 70 varied mini-games, each requiring a minimal amount of skill but providing endless laughs.

For long time fans of the series, the new Bowser and amiibo Party modes expand the experience, providing new ways to play and new features to experience.