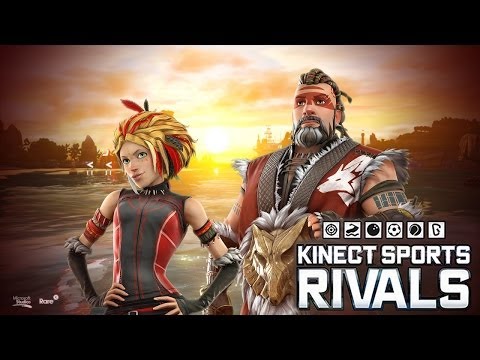 Having tried the game in parts, it’s interesting to see Kinect Sports Rivals share not only get a release date, April 8 in the US and April 11 in Europe, but also more a sense of its core of the experience.

The importance of Kinect Sports Rivals could easily be overlooked, but it is the first game to put the Xbox One fully through its paces, including the new Kinect sensor and rendering at 1080p HD. There is a reason that Microsoft delayed its launch to ensure its delivery on precision promises made for Kinect, it knows that gamers are watching closely to see how this first test of the new controller turns out.

Aesthetically the game revolves around a set of rival teams and characters that determine both the outfits you will wear and the equipment you can access. Wolf Clan are island natives. Eagle Legion are loyal and honorable. Viper Network are crafty and ambitious. Each teams will also bring different challenges and vie for the player’s choice.

The line-up of activities has also been fleshed out a little too. Climbing, wake racing and target shooting are all new, while soccer, tennis and bowling return. It’s in these latter sports that the Xbox One will need to differentiate itself from the 360 version. Players will be able to compare the accuracy, speed and responsiveness of Kinect on Xbox One against the comparative activities on the original game. There is an expectation for this new offering to out perform the original Kinect Sports considerably.

While the current clutch of trailers and game footage make much of the new fantastical environments, it will be the controls rather than the visuals that matter most when the game launches. First impressions here are promising. I had some time with the game recently I was more than a little impressed at the sensor’s ability to not only detect whether my hands were open or closed but whether I was smiling. It’s both proving and communicating this quality of Kinect that Rivals need to do for Microsoft.

Playing the game it feels less like a family novelty and much more like a competitive experience. I’m as eager to play this against my gaming buddies as my children (also I may have more of a chance with the former). It is a game that will take practice and skill to do well at (rather than just faster waggling) and this takes it into the realm of core games.

Looking at the footage for some of the returning sports like soccer, there certainly seems to be more control and player choice here than we have seen before. Rather than the stop go action of the first game here it seems to have a greater flow and get much closer to the real world sport it references. Although seeing my six year old charge around the room kicking invisible balls will never get old, being able to compete against him and have a better chance of winning is a welcome innovation (for all us competitive dads).

Perhaps it’s not surprising then that other core features are found here too, not least the “Driveatar” style compete-while-you’re-away multi-player mode. Along with local and online multi-player challenges, the “Competitar” (as I’m calling it) mode will also let friends and family challenge you to matches when you are not at your console.

Like with Forza, this builds a profile of your performance and then “participates in challenges and continues to compete with friends, even if the player isn’t there.” It’s this kind of intuitive thinking on how people play games together in the real world that will make Kinect Sports Rivals stand out, just as long as the other activities are as accurate, challenging and adrenaline fueled as the first two I’ve tried.