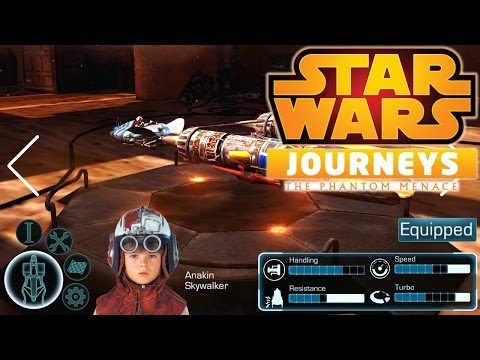 Drawing from the success of its interactive storytelling products, Disney Publishing Worldwide today announced the launch of “Star Wars Journeys,” a new episodic series of apps featuring the stories, heroes and villains from a galaxy far, far away. With immersive story content and fast-paced activities and game play, “Star Wars Journeys” apps will introduce the Star Wars universe to the next generation of fans.

With over six apps planned, “Star Wars Journeys: The Phantom Menace” is the first to be rolled out with others following in sequential order leading up to the release of Star Wars Episode VII.

“The Star Wars film franchise has continuously excited and engaged audiences of all ages for more than 30 years” said Andrew Sugerman, executive vice president, Disney Publishing Worldwide. “Now, Disney Publishing is connecting Star Wars fans to their favorite franchise through a series of innovative new apps that combine storytelling, play, and technology for an epic experience. We are thrilled to help introduce the Star Wars universe to the next generation of fans, and provide those already familiar with the power of The Force new ways to connect with this legendary franchise.”

The Star Wars mobile apps portfolio will continue to evolve with the addition of an all-new category of user generated creativity apps, leading up to the release of Star Wars Episode VII.