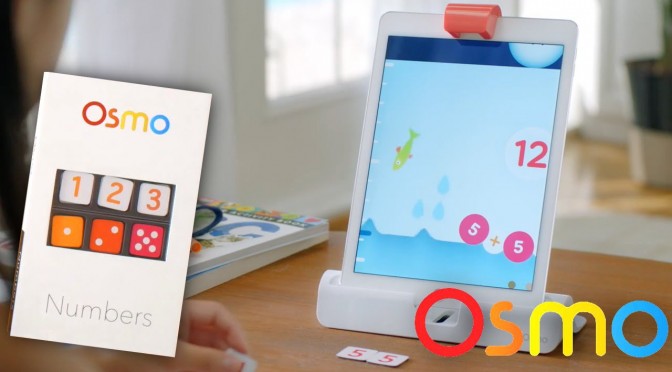 Today, Osmo, the award-winning platform revolutionizing the way kids play and learn on the iPad, releases a new spin on math with the launch of Osmo Numbers. Osmo’s newest game takes on its biggest challenge yet – making math fun and engaging for both girls and boys in a world full of worksheets and rote memorization. Osmo Numbers turns math into a creative and interactive experience that allows for limitless experimentation. Players see real time feedback as they progress which helps kids learn from their mistakes and problem solve as they work towards the right solution.

According to the National Assessment of Educational Progress, only 26% of U.S. high-school students are proficient in math, which is well behind other nations. Math is a fundamental skill and an important building block for the future of kids development. With this in mind, Osmo designed Numbers to help kids build math intuition in a fun learning environment by bringing in physical manipulatives to the digital environment they love. This allows kids to explore and play creatively with math like never before. Osmo Numbers is available for order today in Apple Stores worldwide and online at: http://www.playosmo.com.

The new game is an under-the-sea themed adventure where the object is to release the fish captured in numbered bubbles back into the water. As integers appear on the iPad’s screen, players use physical number tiles in front of the iPad to create an equation to reach that integer. Once you hit the number, the bubble pops and the fish is released. In Osmo Numbers there is no right way to reach an answer, players can use any combo of numbers, or operations.

“Just as gifted hip hop musicians can spontaneously create rhymes, we envision a world where kids have a strong math sense and can put together computations in such a manner – we call it freestyle math,” said Pramod Sharma, CEO and Co-founder of Osmo. “Math was the number one requested experience from our users and we’ve designed Osmo Numbers to foster this freestyle thinking in kids and make it fun to truly understand math and apply it in free-form.”

“Pramod and I both have daughters and we tried everything to find an engaging fun math experience for them – from worksheets to apps to puzzles, but they always lost interest or were discouraged – so we sought to create a new approach,” said Jerome Scholler, co-founder of Osmo. “We quickly realized that the flaw was ingrained in the system, instead of trying to gamify a math worksheet, we had to – in a sense – mathify a game. Finally, even our own daughters can admit to loving math, or at least loving Osmo Numbers.”

Osmo Numbers makes this possible through these core features:
Math Sense – Osmo promotes a trial and error approach that helps kids truly grasp the math concepts through fast experimentation rather than through memorization
Collaboration – Work together with friends or classmates to problem solve your way through the game
Confidence – No more intimidating math problems, as players build their math skills they can move onto the next challenge
Progression – From counting dots to multiplication, the games builds essential math operations skills, adjusting to the player’s abilities

Osmo is also excited to announce the global learning company Houghton Mifflin Harcourt (HMH) as its first educational partner. This partnership will bring HMH’s world-class learning content and engaging manipulatives to the Osmo platform. At launch, Osmo Numbers will be compatible with HMH’s leading math programs Go Math! and Math Expressions through its specialized HMH manipulatives kits, bringing a new offering that aligns in school and at home learning in a more robust way.

Osmo has resonated with kids, teachers, and parents worldwide and has found its way into over 4000 schools and more than 100,000 households around the world. Osmo Numbers is available for order today online at http://www.playosmo.com and select retail partners over the coming weeks. Osmo also introduces the Genius Kit – the complete Osmo system which includes Words, Tangrams, Newton, Masterpiece and now Numbers – at $99.99.