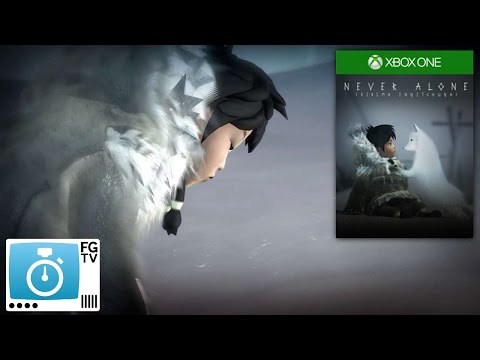 Everything families need to know about Never Alone. From what to watch out for to what players like, here is the ultimate 2 minute guide. Written today by http://www.pixelkin.org.

1. Genre and Story
Never Alone is platforming game where players control Nuna, a young girl, and her fox companion as they navigate a snow-covered, wind-filled environment. A terrible blizzard has hindered Nuna’s village from hunting or gathering. As her villagers begin to starve, Nuna sets off on a quest to find the source of the blizzard with the help of an arctic fox and a magical weapon called a bola.

Progress is made by jumping from platform to platform or solving simple environmental puzzles like moving blocks in order to reach higher areas.

Never Alone is unique in that it tells an actual fable from the native Alaskan Inupiat tribe, and the story is narrated in their language. In addition many of the platforms take the form of spirit animals who have come to help guide Nuna on her quest.

While the darker tones and side-on platforming will remind some of Limbo, Never Alone is also similar to Chariot and even the classic games like the original Super Mario Bros, Never Alone gives two players the ability to play on the same screen, one controlling Nuna and the fox as they move through the game. Like Nuna, the fox can jump across platforms, but he can also scurry up high cliffs and attract spirit animals to help the pair progress through the game. One person can also play Never Alone by themselves by switching between Nuna and the fox with the press of a button.

2. Developer
Never Alone is the first title from Upper One Games who worked closely with members of the Inupiat tribe in developing the game.

4. Duration and Difficulty
Never Alone takes about 2 hours to complete. There’s not much replayability, but besides the game there are lots of short, National Geographic-style videos about aspects of the Inupiat culture.

The gameplay is not very difficult, but young children may be upset by some elements of the plot.

5. UK Rating
“In the UK and Europe, PEGI rates Never Alone 12 for Moderate Violence in a sporting context.”
http://www.pegi.info/en/index/global_id/505/?searchString=never+alone

They highlight that during the game “Nuna can be attacked by a polar bear and a man who throws fire at her. In addition she can fall off cliffs or into water, resulting in her death.” However there is “no gore and Nuna awakes from the same point to carry on her journey.”

6. Other Ratings
In the US, the ESRB rates Never Alone T for Teen [for ages 13 and up] with a descriptor for Violence.
http://www.esrb.org/ratings/synopsis.jsp?Certificate=10012809&Title=Never%20Alone

On Pixelkin we highlighted that although “The game’s artwork may make it appear that the game is aimed at kids, violence occurs when the man catches the fox midway through the game and snaps his neck before throwing him at Nuna’s feet. Even though the fox stays with you in the form of a spirit boy in a fox outfit, we found that scene particularly shocking and somewhat disturbing as well.”
http://pixelkin.org/2014/12/01/review-never-alone/

7. Themes
At its core, Never Alone is a traditional story about a heroine encountering challenges and overcoming them by using her strengths and her friend to overcome them. The beliefs of the Inupiat tribe are evident in the frequent use of animal spirits who help Nuna succeed in her quest.

8. Why people play:
Never Alone gives remarkable insight into the culture of a native Alaskan tribe through the telling of one of its tales. Nuna and her fox companion inspire a sense of loyalty in the player as they overcome seemingly insurmountable challenges. All this happens even though Nuna never utters a single word in the game.

Perhaps the best thing about the game, though, is that it offers a unique experience that parents and kids can enjoy together while learning a little something along the way.