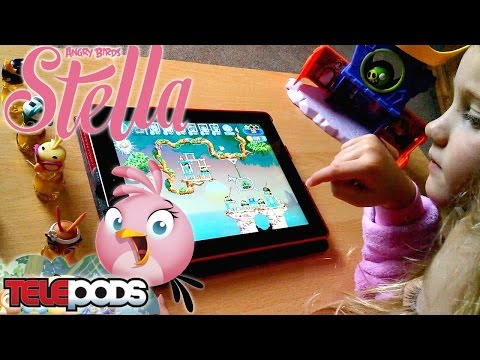 With the Piggy Palace play-set unboxed and in regular use, the kids have been clamoring to add more characters to the mix. In this third in our series of Angry Birds Stella play-set videos, we’ll take a look at the Birds Rock Together Collection. This set features five characters that can all be imported into the Angry Birds Stella game via the telepods technology.

The Birds Rock Together collection re-imagines Stella with an Elvis like appearance who takes the role of lead singer in a rock band, with Willow on keyboards, Poppy on drums and Dahlia on guitar. There’s no place for little Luca in the band, but the Bad Princess Gale is lurking around, no doubt cooking up some devious scheme. The packaging for the characters also doubles up as a playset, presenting a stage and a number of rooms in which you can roleplay with the characters.

Each of the characters in the band come complete with a whole new style and some accompanying instruments. So not only can you now re-style your Angry Birds Stella toys with a variety of clothing, you can also mix and match characters with the selection of instruments that are available. Be aware that this set doesn’t come with a swing, so the focus here in clearly on creative role-play, rather than the more action orientated sets that revolve around flinging the birds at various targets.