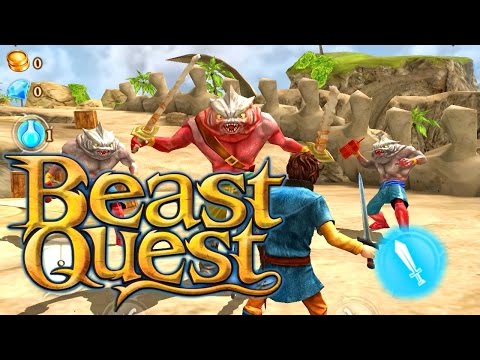 We have a closer look at the new Beast Quest video-game for iPad and Android tablets. In this video we meet new enemies and beasts as well as explore more of the world of Avantia.

It all culminates in a massive battle with Sepron as Tom tries to free him from the evil curse of Malvel and get the enchanted chain off his neck.

We spoke to Ben Meakin at Miniclip about the game. Why should kids play Beast Quest?
It combines some of the best elements of games like Zelda and Infinity Blade into a compelling single player adventure. Beast Quest fans will love seeing the worlds and characters they know coming to life, and those new to the books will quickly see why it’s so popular. There’s treasure to find, different worlds to explore, and of course huge screen-filling Beasts to battle.

What’s the most awesome thing in Beast Quest? Picking a single thing out in Beast Quest is tough, as there is so much to talk about! From seeing the awesome Beasts in brilliant 3D to the fast-paced combat against multiple enemies, there is loads to enjoy. However, if I had to pick one thing, I’d say the huge open worlds are the heart of what makes Beast Quest great. With six huge worlds based on each of the original books, there’s a ton of things to do, see, and battle.