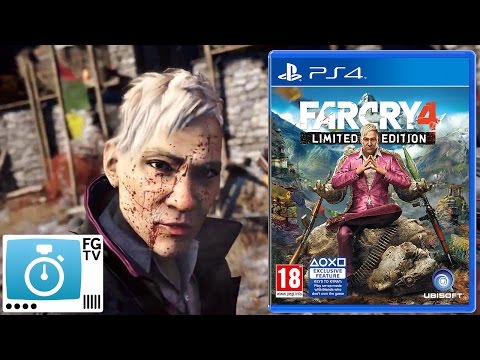 Welcome to Family Gamer TV and everything that families need to know about Far Cry 4. From what to watch out for to what makes this game great, this is the ultimate 2 minute guide.

1. Genre and story:
Far Cry 4 is a action adventure, first-person shooting game, it includes a campaign that can be played cooperatively with a friend online as well as competitive online modes.

The game takes place in a region of Nepal that is consumed in a Civil War. You play as Ajay Ghale who is returning to the region to spread his Mother’s ashes in a place called Lakshmana, but are soon caught up in the battle between the Nation’s freedom fighters called the Golden Path and the self proclaimed ruler of the region, Pagan Ming. From there you’re free to explore the Himalayan setting and seek to end Pagan Ming’s rule.

As you liberate enemy outposts, and assist the freedom fighters you receive points that can be used to gain new abilities, making the player’s character increasingly powerful. You kill wild animals to upgrade other equipment; animal skins are required to gain larger wallets and carry more weapons and ammunition.

4. Cost:
The game has a recommended retail price of £43/$60. The game also has a Season pass available for it that will add additional downloadable content to the game, this costs £24/$30. Xbox Live or the Playstation Network are required to play online with others.

5. Duration:
Far Cry 4 takes around 13 hours to complete the main story campaign but offers lots of optional content that can easily extend this to around 20 hours.

In the UK and Europe PEGI rate Far Cry 4 suitable for the over 18s for Violence, citing that it contains “extreme violence, multiple, motiveless violence and violence towards defenceless people.” The GRA expand on their PEGI rating, stating that the game contains “violence towards animal and human characters and strong language.” It also describes a torture, “in which a man is strapped to a metal bedframe, which is wired to an electric battery, and shocked while he is interrogated.”

Violence towards humans is commonplace, whether innocent or not. “There are repeated instances of violence towards innocent hostages who are beaten, burnt and shot at while restrained.” Strong language includes ‘f*ck’, featured reasonably frequently, and ‘c*nt’, used twice.

7. US – ESRB:
In the US the ESRB rate it as M for Mature, stating that “players engage in a variety of frenetic combat missions and use machine guns, pistols, shotguns, knives, and explosives to kill enemy fighters amid mountainous environments.” and that the game “includes some sexual/suggestive material, including dialogue referencing sexual activity.”
http://www.esrb.org/ratings/synopsis.jsp?Certificate=33693&Title=Far%20Cry%204&searchkeyword=far%20cry%204

Comon Sense Media states that Far Cry 4 includes “intense violence, blood, and gore, as well as disturbing torture and execution scenes. You can also expect some nudity and lots of very mature sexual references” in the game.
https://www.commonsensemedia.org/game-reviews/far-cry-4

9. Themes:
Players begin the game innocently hoping to scatter the protagonist’s Mother’s ashes in her homeland but within the first 10 minutes of gameplay this focus quickly shifts from that of peace to war as he becomes embroiled in the region’s Civil unrest. The nation’s war becomes a personal one, driving the character to fight to free it’s people from their tyrannical leader.

The hope of redemption for the country runs throughout with the player having difficult decisions to make about embracing or leaving Kyrat’s traditions and creating a future for it’s population, this includes issues such as women’s role in society and drug production.

Far Cry 4 is a gorgeous action adventure game set in the breathtaking Himalayas. The game allows its players a large amount of freedom in their approach to completing the game’s objectives. While these elements are not uncommon, Far Cry 4 combines this freedom with a huge environment and varied strategies create an involving world with substantial meaning.