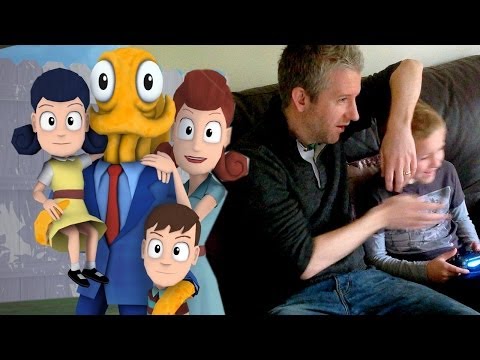 Octodad started life as game developed by students at DePaul University, but grew in popularity so much that the team behind it set about raising funds for a sequel via Kickstarter. That sequel, Octodad: Dadliest Catch has now made it’s way to the Playstation 4, so we go tentacles on with the game to see what makes it such a special title for kids and adults alike.

In this video we’ll play through the second level of the game as Octodad attempts to navigate a day at home with his wife and kids, doing everyday chores around the house. Sounds easy, but the challenge of Octodad lies in controlling his various limbs at different times to move around and pick up objects in order to complete a wide selection of goals. All of which must be done under the watchful eye of family members who are becoming increasingly suspicious about your true identity.

It’s not just the lawnmower and BBQ that prove a challenge for Octodad in this level as we come face to face with a neighbour who appears hell bent on revealing Octodad’s true identity. Will we escape his evil clutches?