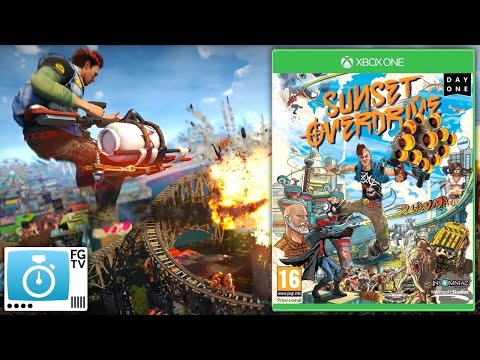 Family guide to Sunset Overdrive, from what’s great to what to watch out for here’s the ultimate 2 minute guide.

Sunset Overdrive is an open-world shooting game with fantastical weapons players can customise. It is unlike other shooting games because of the fast pace movement, saccharine visuals and mature writing.

A key feature is the ability to customize everything about your character from appearance to behaviour and abilities. Amps for instance offer special boosts that enable your character to summon additional attacks like the grim reaper or a tornado.

Sunset Overdrive features a co-op mode called Chaos Squad. You and seven others join forces to complete missions before venturing to the Night Defence wave mode to fight off hordes of mutants.

2. Developer:
Sunset Overdrive was developed by Insomniac Games and published by Microsoft, famous for the Ratchet & Clank and Spyro series.

3. Format:
Sunset Overdrive is exclusively available on Xbox One.

5. Length:
Sunset Overdrive is roughly the same length as previous Insomniac games which can be completed in 20 to 30 hours for the average player. There’s plenty for players to collect everything from new amps, to new costumes and weapons.

PEGI rates Sunset Overdrive as only appropriate for those who are 16 or older, with content descriptors for violence and language that highlight “sustained depictions of death”, “strong language”. It also reminds players that the game “allows the player to interact with other player online.”

The Games Rating Authority expands on its PEGI rating by pointing out that during the gameplay that “Players must fight humans who have mutated from drinking too much of the energy drink.” They state that the “violence is non-realistic and consists of you using a wide variety of weapons to mangle and destroy your human and fantasy enemies. Blood is shown and bodies remain on the ground when killed.” It also highlights Language includes the F word.
www.pegi.info/en/index/global_id/505/?searchString=sunset+overdrive

8. Common Sense Media:
Common Sense Media rating the game as 16. Sharing with us that “It’s NFK, for it’s over the top violence, sexuality, profanity, and drug references, which are scattered through the game constantly. While it’s cartoonish with its visuals, the need to kill thousands of mutants, robots, and other humans with crazy weapons is rather graphic. The red flags aside, however, the game stays fresh with its single player, co-op, and multi-player missions, along with loads of collectibles, rewards, and special abilities that you unlock. It’s definitely tongue in cheek, but for mature audiences only.”

9. Themes:
Sunset Overdrive is set in a bright sugar coated world known as Sunset City, but soon the player is thrown into a post-apocalyptic city inspired by films like Scott Pilgrim Vs The World.
Players may find the look of the mutated humans unsettling if they are not used to grotesque imagery.
The game’s mature language and mild gore which can be turned off in the settings for players who find this disturbing.

10. Why people play:
Sunset Overdrive features amazing customizations giving the player the choice to be whoever they want to be. The customizations flow into all aspects of the game from the characters to weapons to the environments enable each player there own unique way to play.

But the biggest draw of Sunset Overdrive is the fantastic free flowing movement everything from riding on rails to running on walls.

With hundreds of different costumes to collect and perfectly balanced game mechanics, it’s a game to keep players satisfied for a long time.