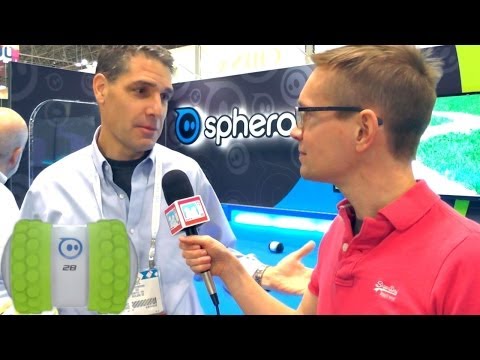 We grabbed Paul Berberian, Sphero CEO, to find out more about the new Sphero 2B tube based remote robot. Berberian has founded and run seven high-tech companies over the last 18 years. In 2010 he became the CEO of Boulder based Orbotix. Orbotix are the creators of Sphero, an app-controlled robotic ball that is a completely new type of game system.

“It’s all about connected play, we’re trying to get kids away from just tapping the glass on tablets and getting them up off the couch running round the house with sophisticated techno fun.”

SPHERO 2.0 – http://www.gosphero.com/sphero-2-0/
Play – Powered with a new engine, Sphero 2.0 is capable of rolling at speeds of up to 7 feet per second. Trust us, this thing hauls. And that’s just the beginning. There’s a whole new world of gameplay waiting to be discovered with Sphero.
Learn – Sphero is an interactive and engaging robot that brings programming off the computer and into real life. With over ten different programming environments, and apps like MacroLab, kids as young as eight can learn how to program.
Explore – Create racecourses and drive circles around your friends, turn your living room into a video game with augmented reality apps, and upgrade family game night with multiplayer fun. The possibilities with Sphero are as limitless as your imagination.

SPHERO 2B
Tricks – Launch over the competition at 14 ft/s with high-speed tricks and jumps. Sphero 2B is awesomely agile thanks to its tubular design. It tumbles, too.
Customise – The world is your playground when you can conquer any terrain. Customizable tires, hubcaps, and accessories make anything possible with 2B.
Multiplayer – Interact with friends on a whole new level with built-in infrared technology for multiplayer games. 2B times two is two times the fun.
Programmable – Learn to program and embrace your inner hacker with this fully programmable robot. You’ll be helping robots take over the world before you know it.
Connects to iOS or Android devices via Bluetooth LE, is powered by USB charging, and sports a durable polycarbonate body.