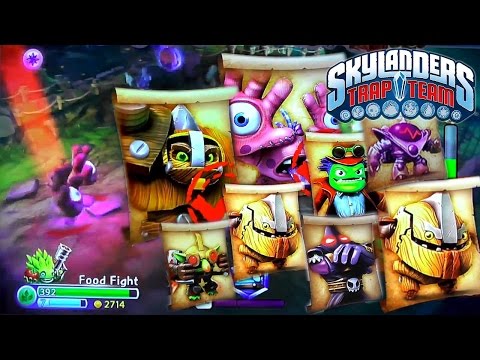 At EGX we got hands on with Trap Team, and through the kind help of everyone else who played made some great progress through the game.

Some of these villains are likely Doom Raiders, two of which are yet to be revealed; and some are of an unknown element. Will these fit in the sun/light, moon/dark elements that we’re expecting to be officially revealed soon?

We saw the following levels:
1 Soda Springs – Save Skylanders annual Soda Festival from certain terror.
2 Know-It-All Island – Seek out the Stoneheads to learn more about these escaped villains.
3 Chompy Island – Track down one of the Doom Raiders, the Chompy Mage, at his maountainous lair!
4 The Pheonix Psanctuary – Stop Chef Pepperjack from stealing the Pheonix Chicken.
5 Chef Zepplin – Don’t let Chef Pepperjack escape in his floating fortress!
6 Rainfish Riviera – Try to find Mags’ Information Squid and not get eaten by a giant fish at the same time!
7 Monster March – Kaos has told you where to find the Dreamcatcher. But can you trust him?

9 Telescope Towers – Follow the Dreamcatcher to a Mabu observatory and save the scientists.

10 Secret Sewers of Supreme Stink – Journey to a legendary sewer to prevent the Doom Raiders from acquiring green goo!
11 Wilikin Workshop – Dr Krankcase has taken over a Wilikin Factory. So that’s where you should go too!

12 Time Town – Rescue Kaos (for real) at the Clock of Skylands.

13 The Future of Skylanders – Travel 10,000 years into the future to capture Wolfgang before his concert begins.
14 Operation: Troll Rocket Steal – You have a rocket. The evil trolls have one.
15 Skyhighlands – Take your squadron to one of the highest parts of Skylands to find the location of the Golden Queen.