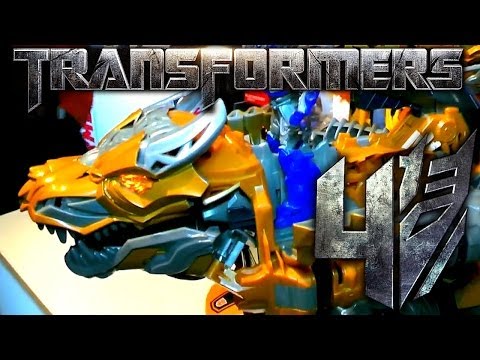 We take a close look at the upcoming Transformer toys for 2014.

Age of Extinction is almost upon us, so what better place to start than with Dino-bots like Grimlock. Their first outing in cinema coincides with a new one-step conversion from Dino to Robot not to mention the Optimus Prime pilot triggering sound effects and lights.

This led onto the Mega One-Step Bumble Bee a character I remember from when I was younger. He is joined by the newer Drift character that also has one-step changer toys.

Then there are the Flip and Change transformers. We looked at Grimlock robot and Dino-bot. Also Lockdown from Age of Extinction that is transformed by flipping out and grabbing the car doors to change,

Finally we took a tour of the new Generations line of toys. My favourite was the Evasion Mode Optimus Prime that harks back to the Generation G1 days.

The 30th anniversary of Transformers is celebrated with collectors version of classic characters like Jet Fire, Rhinax, Skybyte, Skywarp, Star Scream and Whirl. Then there was the fan design bot Wind Blade seen for the first time.