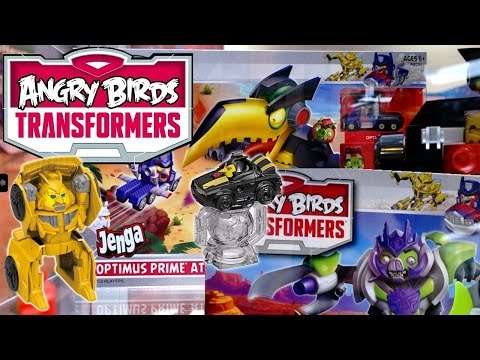 Having just launched Angry Birds Stella in both appstores and retail stores worldwide, Rovio plan to follow it up on October 15th with Angry Birds Transformers. This cross-over title re-imagines Transformers from the comics, TV show and movies as the eponymous Angry Birds, much like Rovio have done so successfully with Angry Birds Star Wars. However, while both games feature the telepods technology that allows you to use your physical toys in the games, the Angry Birds Transformers have the added benefit of being able to be played with in vehicle or robot form. Whether that will end up being the case in the game as well, has yet to be revealed, but we imagine you’d be crazy to launch a Transformers game where you couldn’t play as both robot and vehicle.

Up until now we’ve only had a few promo shots of the telepods toys to use as any kind of guide to what characters we might see in Angry Birds Transformers. However, recent images from San Diego Comic Con and the Hasbro website, give us a better look at what to expect. One key ingredient returning from Angry Birds Star Wars and Angry Birds Go! are the Jenga sets, This time out we get two sets, one featuring Bumblebee (Chuck) and Grimlock (Hal) and the other containing Optimus Prime and Galvatron.

Of course there will also be plenty of telepods related Transformers characters, both good and evil, sold both individually and in toy battle packs. Be sure to also look out for the Energon Racers pack which includes five figures made from translucent plastic, rather than solid bodywork of the normal figures and the Optimus Prime Raceway set, where you can pit Autobird against Decepticon to find out who is the fastest Transformer around.