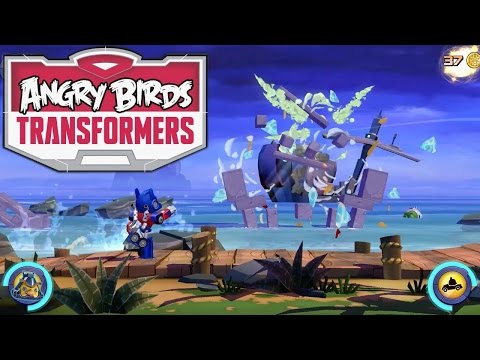 The wait for Angry Birds Transformers is almost over. The game has soft-launched in a few countries around the globe as the October 15th worldwide release date gets ever closer. In lieu of getting hands on with the game, we have the next best thing today, with our first look at gameplay. This means we can finally find out exactly what type of Angry Birds game this will be and whether our previous suspicions were correct.

Transformers and especially the recent movie franchise have always been about action and adventure and it seems Angry Birds Transformers will be no different. We’re sure you’ll agree that there’s never been an Angry Birds game quite like this one. Characters are dropped into the action by Astrotrain, where they run through a 2D environment (albeit one with more depth than that description suggests) blasting any and every pig that crosses their path.

Autobirds and Deceptihogs look to be fighting a common foe in this game as they team up and work together fighting their way through the environment. Player can tag in and out as various Angry Birds Transformers characters and seemingly transform between robot and vehicle mode on the fly. Upgrades are available and power ups can be used to bring extra firepower to bear on the enemies in the game. The game takes place in a variety of environments, but the focus is very much on the action.

There’s no hint yet at how the telepods integrate with the game, but we’ll have hands on with the game soon and we’ll bring you footage of that and any other details we find out as soon as we can.