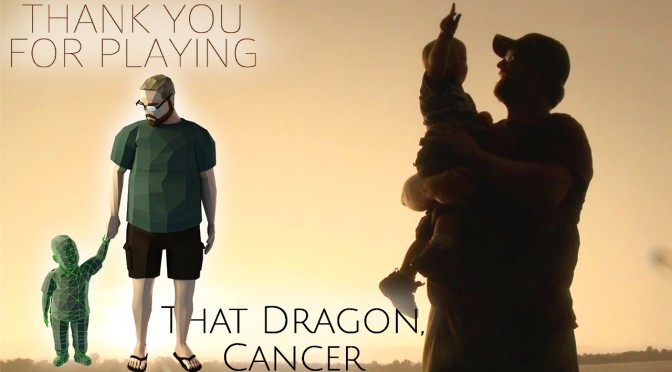 We talk to film makers David and Malika, directors of “Thank You For Playing” the film about the video-game That Dragon, Cancer.

David “People in western society don’t talk about these experiences as openly as you would expect. They wanted to start conversations with people about having a family member who is terminally ill, rather than it being privatized.”

Malika “Indie game community is a nurturing and accepting world. There’s this acceptance of difference that is radical. Ryan and Amy are Christians and for them it was importance to include that in the game. It was interesting to see how much acceptance of this there was for folks who weren’t religious themselves but were able to recognize this was part of Ryan and Amy’s identity.”

David: “There was a really special story happening here, not just about a guy making a video-game about his child but also the idea of connectivity and how we learn to talk about difficult emotions, and the spaces we choose to talk about those emotions. In this case the space was a video-game conference — a rarefied space for talking about how you feel.”

Malika “The film is about the role that art plays in our lives. About a video-game and challenging the boundaries of what games can be and do. But ultimately it examines why we as humans have art so central to our lives, a way to express and explore some of the most difficult experiences in our lives.”

David “It’s an invitation to think about the way we go through the process of grief and how art is a proxy, and has been through history, to deal with the things that are impossible to deal with through life.”

David “Faith, historically, is another way to accept things that are unacceptable and explain things that are otherwise explainable. To be able to create this video-game for the Green family is also a way to have some control, as religion also provides us. As Ryan and Amy would say to surrender that control a bit and accept grace was important for them.”

David “The Green’s faith is essential to their life, especially with the idea of family and what happens to loved ones when they die. Particularly when it comes to how we remember and memorialize them.”

Malika “What are the thought processes you go through in grief. For the Greens the creation of this work of art as a means of sharing and not having things bottled up. What was really special was that Ryan and Amy were willing to open up to use. This included their doubts around making the work of art, and also quandaries about why this was happening in the context of their faith. Why is my child dying and what is going to happen to my child after they die. A lot of these issues are relevant to audiences who aren’t religious at all.”