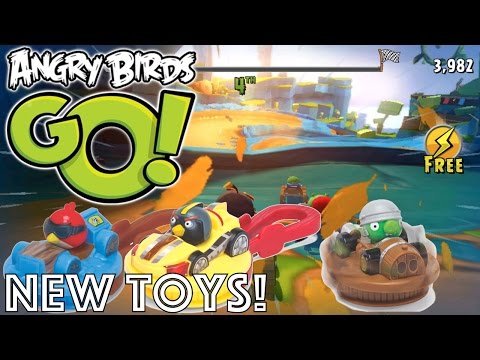 Angry Birds have landed at Burger King! From January 15th you’ll be able to pick up a kids meal from BK that contains either and Angry Birds Go! or Angry Birds Stella toy. Not wanting to miss out, we rushed down to Burger King to pickup a toy on the day of release to see what the fuss is all about and find out whether they’re good enough to lure parents and kids away from other popular fast food chains in search of the full collection. If our kids are anything to go by, Burger King can expect to see a sudden surge in demand for their kids meals.

There are six toys to collect, three from each game, with the Angry Birds Go! toys focusing on action with character themed spinning kart toys; while the Angry Birds Stella toys focus on creativity and puzzle solving. There’s certainly more variety in the latter, but it’ll be interesting to see which is more popular. At the moment the toys aren’t specifically being touted as for girls or for boys, but there is an undercurrent of a gender split, so let’s hope staff in store don’t offer them out in that way.