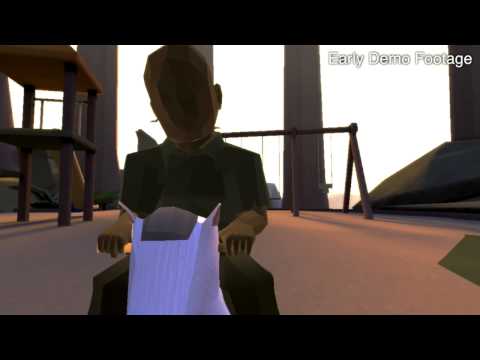 That Dragon, Cancer is a video-game about a child with cancer. Today, a Kickstarter campaign launches to complete its development. The goal of $85,000 will enable the game to be complete in expanded form and bring it to PC/Steam as well as Ouya.

I spoke to Ryan Green just before the Kickstarter went live to hear about the project and how life is progressing for the family.

If you’ve not come across it before the idea of a video-game that addresses both personal loss and religious hope may sound like a category mistake. Surely this is the territory of books, films and plays?

However, experience the game first hand and the wisdom of the project is immediately apparent. In developer Ryan Green’s words, “That Dragon, Cancer tells the story of our son Joel and his 4-year fight against cancer. Our desire is to craft an adventure game that is poetic, playful, full of imagination and of hope. This is how we choose to honor him and his memory.”

I interviewed Green previously at E3, here’s the video from that event along with footage from the game:

Playing three new scenes today, I was reminded of my encounter with the game’s original demo last year. Simple mouse movements and clicks navigate a world that is intentionally impressionistic and lends itself to projecting your own family and loved ones into the scenes.

As you can tell, these new levels extend the emotional experience of the original demo, now though there is added weight and a detectably different tone that comes in part from the news that Joel died on March 2014. Joel’s dad and developer Ryan Green described this to me when I interviewed him.

“It was always our desire that this was not a game characterized by how it makes you cry, but we wanted to embody the bitter with the sweet. Recently we’ve been working on who Joel was, his mannerism, his behavior and his laughter and the way in which he played.”

Taking the experience further into uncharted waters it includes the Green’s Christian faith, not something that usually enamors positive reactions in gaming communities. But here, in context and inescapably part of the story, it makes complete sense.

I ask Green whether the experience of making the game and Joel’s death had altered his faith and, after a pause, his answer was both humble and heartbreaking. “When Joel was alive we were still hoping for the miracle, but I think the challenge is to find the beauty when the story doesn’t turn out how you were hoping to write it.”

Although it is hard to predict these things, how far the game has come in a short time and the huge potential it has ahead should indicate that this is one Kickstarter that will quickly fly. Certainly, it deserves your attention.

With the additional aspects of the game and the new platform, That Dragon, Cancer is now planned for release late 2015.