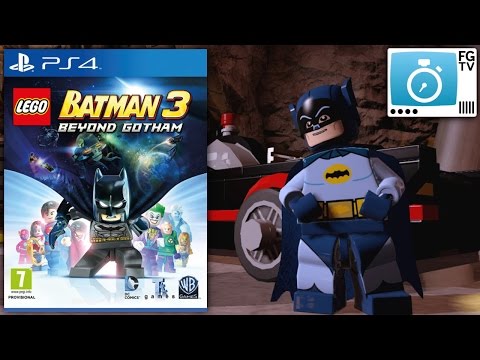 1. Genre and story
Lego Batman 3: Beyond Gotham is an action-adventure game in which players control Lego versions of DC characters (e.g., Batman, Superman, Wonder Woman) as they attempt to stop Brainiac from destroying the Earth and the Lantern Worlds.

This is the follow up to Lego Batman 2: DC Superheroes, which took the Lego Batman series into the wider DC Comics world. Lego Batman 3 takes this a step further including 150 characters from a host of well known comic book franchises and also introducing a wider variety of suits which players can use to overcome the many puzzles.

As is common with Lego games, gameplay features exploration, combat and puzzle solving elements, with replayability fuelled by the unlocking of new characters and the powers that they wield. This comes with lashings of wisecracking humour, a common feature of all the Lego games to date.

The game can be played solo or with two players in split-screen co-operative mode, but does not feature any online multiplayer modes.

2. Developer:
Lego Batman 3: Beyond Gotham is developed by TTGames, who are responsible for Lego Marvel Superheroes and Lego Batman 2: DC Superheroes as well as a number of other previous Lego video games.

Mention differences in 3DS/Vita versions. Mention whether they have multiplayer.

There will be a variety of pre-order bonuses available at retailers, as well as six future downloadable content packs to support ongoing play. For the first time in the history of Lego games, a Season Pass will also be available, allowing you the option of paying up front to receive all of the DLC packs on release at no further cost.

5. Length:
We expect the main story to take around 9 hours to complete, but to collect everything in the game is likely to take you over 20 hours.

6. PEGI/ESRB rating:
This game has a PEGI 7 rating. PEGI state that the game contains non realistic looking violence towards fantasy characters. The violence is set in a cartoon, slapstick or child like setting, but could be upsetting to very young children. There are also pictures or sounds that are likely to be scary to young children.

9. Themes
Lego Batman 3 draws in all generations of the DC comics character including classic 60’s Batman, this along with the other rare DC characters offer a trip down memory lane to revisit childhood comic themes for parents.

Heroes and civilians in peril persist as the driver for players to solve problems in the game. Although these are cartoon in nature, there is still a high impact feel to proceedings. Fighting and shooting is exuberant and may lead to youngsters following suit once they have finished playing.

Seeing real Lego kits appear in the game will spark players to revisit these toys and possible recreate in game characters and locations from their own bedroom brick collection.

10. Why people play:
Apart from their cross-generational appeal, the Lego games are well known for solid game-play and tongue in cheek humour. The difficulty level of the game is set to appeal to all ages, with co-op play built into the main adventure allowing children and families to play together in a world that offers a large number of playable characters and varied gameplay.