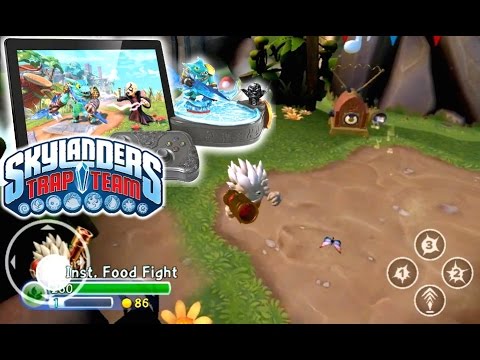 One of the biggest reveals ahead of the launch of Skylanders Trap Team, wasn’t a new figure or new elements, it was the announcement that the full console game was coming to tablet devices, with a range of iOS, Android and Kindle tablets supported:

We also get into some Knight Mare, Knight Light, Blackout and Spotlight discussion.

The digital download is free from your respective appstore and allows the whole of the first level to be played without the need for a Traptanium Portal, Skylanders figures or traps. Instant (digital) versions of the Starter Pack’s physical content are included in the game, allowing you to play as Snapshot and Food Fight, along with any Life or Water villains you trap along the way. The digital experience doesn’t stop there though, as other packs of digital content are available to purchase online, to extend the experience.

In this Let’s Play we’ll look at the digital experience of playing the first level of the game, to see how it differentiates itself from using the physical toys. We’ll have the opportunity to trap Sheep Creep and The Gulper, explore behind one of the Traptanium Elemental Gates and discuss an Unknown Elemental Gate and discuss some news about the characters you may need to open it.

Graphically you’ll see quite a difference between this and the console versions of the game, but be aware we’re playing on an iPad 3 running iOS7, which is the base level of hardware that you can run the game on. We’d expect the more recently released tablets to provide a closer comparison to their console peers.