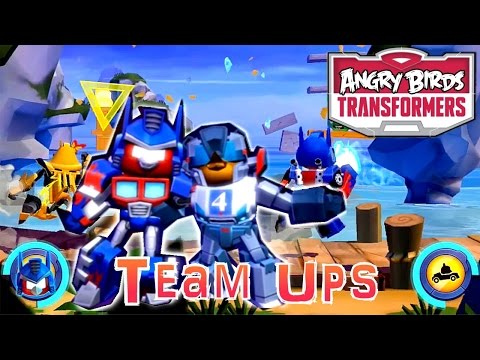 Wes plays through some later levels of the game teaming up with Optimus Prime, Soundwave, Jazz, Bumble Bee.

After taking down some of renegade pigs with Optimus Prime and Bumblebee in our first Let’s Play video, the Eggbots have been hard at work creating more levels for us to play. Before we jump into those, we’re going to need a little help. Fortunately, the Deceptihogs are taking a break from harvesting the world’s energon supplies to help with the fight. First to join up is Soundwave, who many older Transformers fans will recognise in his G1 robot form, but who appears to have an alternative vehicle mode to the tape deck many will be familiar with.

Sometimes though, just one Transformer isn’t enough to take down the sheer number of pigs that each level contains. Thankfully, you own collection of characters can be supplemented by those of your friends and other people playing the game, allowing you to team up and take on the challenge of each level together. Rather than a co-op mode, this merely allows you to call on the character during the level and use the firepower of both to help you overcome to the challenge. In this video, we’ll see Jazz and Soundblaster join us for a team-up on a variety of levels.