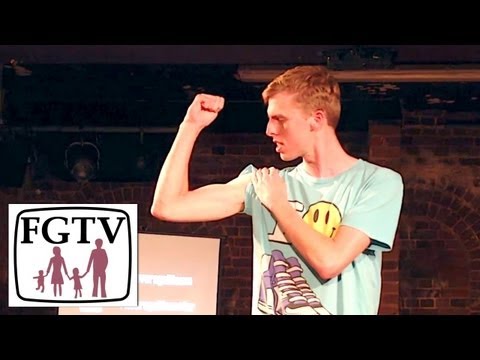 I am a man.
Sometimes I put my manhood on display,
like going skinnydipping in the sea on New Year’s Day.
I’ve gone up for thirds in an all-you-can-eat buffet
and I have not once worried about how much I weigh.

I am a man.
Sometimes I do manly things,
not to prove I am a man, but that’s just part of what it brings.
So when I stay up playing FIFA on my PS3 til 4, it’s not because I’m insecure, it’s cause it’s fun.
And some say that real men are brave men,
And brave men are cave men, And cave men are men who do not really show emotion.
I say, if something is real, it’s something you can feel. And that can be love, religion, fear or uncertainty.

Cause real men have issues, and real men cry,
That’s why they make man-sized tissues for their man-sized eyes.
And I cry quite a lot.
And in this day and age,
whether a man’s eyes are dry or not determines that he may be gay…
But I am not.
I like a girl, I just cry like a girl at certain things.
And my main form of catharsis is pixar flicks.
The reason that I see them in the cinema is
So you cannot see my tears behind these 3D glasses.
Cause I broke down in Up, I wept in Toy Story 3, was on the brink in Monsters Inc and Cars did the same thing to me. When watching Wall-E I wasn’t worried about which of my friends’ willies was bigger
Cause something in the animation pulled an emotional trigger
And you may snigger, if you see these guns are not the manliest
But I figure that ain’t the best way to measure manliness.

‘Cause real men have issues, and real men cry,
That’s why they make man-sized tissues,
Not to be misused by never-been-kissed youths in dimly lit rooms searching YouTube for big boobs,
But for the man-sized tears that run from man-sized eyes
And the last one I used was watching Sky News when the story came through of a kid named Jordan Rice in Australia,
In the worst floods in years, which reduced many men to floods of tears,
When faced with death, he didn’t hesitate or take a breath, just gave his life for his brother,
So I cried for the brother who died for another, aged 13, the age a boy steps into manhood, proved that he could fill his boots as well as any man could,
‘Cause real men are brave, right?
Well it don’t get much braver.
So yes, I am 19,
I’m not the most prolific shaver
If anything I only really weekly need a razor,
maybe bi-weekly
and not as in twice weekly
as in once every two weeks
maybe even longer
sometimes I am too weak and I wish I could be stronger
I did Movember and nobody even noticed
but, know this, I am a man
as are about half of you
regardless who has been doing press-ups all afternoon
and when I was 13 I’d stand on my head
until the sky was green and the grass was blue
and somewhere on this path I grew
so yeah I’m still a kid at heart and not ready to grow up
and when I go to Nando’s I drink too much coke and throw up
but here’s something that we can raise those refillable glasses to
cos growing up is something not every kid gets a chance to do
———-