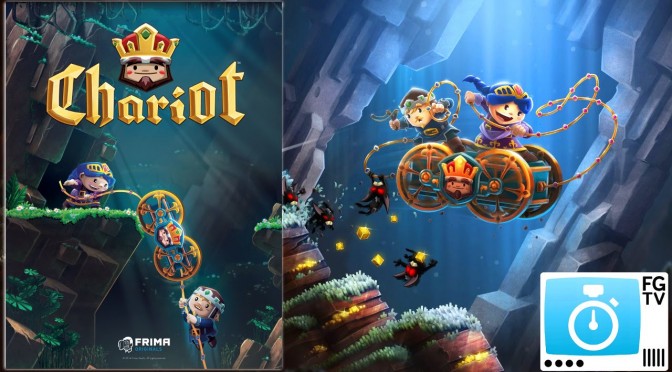 Everything that families need to know about Chariot. From what to watch out for to what makes this game great, this is the ultimate 2 minute guide.

1. Genre and story:
Chariot is a 2D platform game, in a similar style to the classic Mario games, but with a twist. You have to get a chariot containing your deceased Father (the King), as well as yourself, to the end of a level.

The chariot can be pushed, rode on top of and dragged with ropes to maneuver through the game’s increasingly inventive levels. Players need to use the basic moves to solve each puzzle in creative ways.

To help you with these puzzling levels the game has been designed primarily for cooperative play with a friend or family member sat together on the sofa, though the game can also be played alone. There are also optional elements that require two players to work together to solve.

Other 2D platform games with an interesting twist to them include Thomas was alone and The Cave.

3. Format:
Chariot is available for Playstation 4, Xbox One, Wii U and PC.

5. Duration:
Chariot takes around 13 hours to complete. But does have lots of hidden extras, such as treasures hidden throughout it’s levels and special areas that can only be reached by 2 players who are working together.

6. UK and Europe – PEGI rating and additional consumer information:
In the UK and Europe PEGI lists Chariot’s content as suitable for everyone aged 3 and up.

7. US – ESRB:
In the US the ESRB rate it as E for Everyone aged 6 and over, describing its content as including mild fantasy violence.
http://www.esrb.org/ratings/synopsis.jsp?Certificate=10010402&Title=Chariot&searchkeyword=chariot

8. Common Sense Media:
Common Sense Media recommends that Chariot is appropriate for children aged 6 or more. Stating that players will have to fend bats, penguins and other threats, but there is no blood, and enemies disappear when defeated.
https://www.commonsensemedia.org/game-reviews/chariot

9. Themes:
Chariot carries the theme of death throughout its adventure but does so in a light hearted way, with the deceased King’s ghost regularly appearing to taunt the players.
Cooperation is important to the design of the game and despite it being playable alone it is very much designed to be played working together with someone else. When playing together the game demands communication to successfully complete the numerous puzzles.

10. Why people play:
The combination of old school platforming is brought to life with the novel Chariot interaction to attract long time players of these games as well as newcomers. Chariot is a charming game that is challenging and satisfying to play alone but is at its best when teamed up with another player on the sofa to enjoy together.