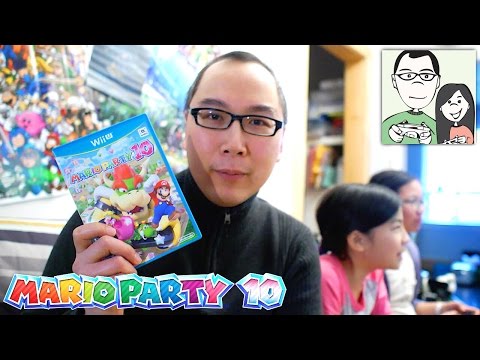 We get a family to test out how important the amiibo figures are in Mario Party 10, it turns out “very important”.

Mario Party 10, like those before it, is a collection of minigames arranged around a board game. As you roll the dice and move around the board, random games and challenges are triggered depending on what space you land on.

Like a board game, there is some randomness involved. You might get a lucky roll and scoop up a lot of stars in one turn, suddenly going from 4th place to 1st. Or you might find yourself on a Bowser square, and lose stars. Some of that randomness can be infuriating, especially for more competitive kids. I can remember many games that ended in tears because someone saw their lead overtaken by a last minute turnaround by another player. Take it as an opportunity to talk with your kids about winning and losing, and about having fun together. And if your kids are young, if you want you can give them some extra stars before you start the game, to even things up a little.

Mario Party 10 has a new Bowser Party mode, where one of you takes over the role of the villainous Bowser, intent on ruining the game for everyone. This mode is great for giving younger children, or less advanced players a chance to be the overpowered Bowser, perhaps turning the tables on older siblings or parents.

Then there’s amiibo Party mode where you tap your amiibo on the Gamepad and it unlocks a board themed around that character. Your playing piece in the game will also be the amiibo. The amiibo that are supported are Mario, Luigi, Peach, Toad, Yoshi, Rosalina, Donkey Kong, Wario, and Bowser. What’s nice the way Nintendo has done it is that you only need one amiibo to play this mode. There are some limitations, though. If you only have one amiibo, you can only unlock that character’s board, and only that player’s in-game character will be an amiibo. The rest will be cardboard cutouts on little plastic stands.

Also you can only store data from one game at a time on amiibos . That means that if you have Smash Bros. data on the amiibo already, you’ll need to erase and replace it with Mario Party 10 data. And there’s no way to backup that data, so once it’s gone, it’s gone. If you don’t want to go that route, you can still use the amiibo in a special daily bonus mode without deleting the data. It gives you bonus Party Points for just touching the amiibo to the gamepad. You can even use amiibo characters which aren’t supported in the game, if you have some from Smash Bros. for example.

Our youngest, she’s chosen not to use her Peach amiibo with Mario Party 10, because she wants to hold on to the Smash training that we’ve done. Her Peach is a level 50, created out of a long afternoon gaming session with friends, some pretty competitive Smash players.

One round my daughter chose to bow out of the game, but instead put her Peach amiibo to stand in for her. By the end of that afternoon, her amiibo was handily defeating all of us, even the best in the group. It was her Peach, and we found ourselves cheering and celebrating when she knocked out the final fighter. My daughter’s amiibo is special to her because of that afternoon, and to delete it would feel like, in a way, losing that memory.

If you have similar attachments to your Smash Bros amiibo, you may find it hard to let it go. You might have to buy a second amiibo of that character for use in Mario Party if it comes to it. Or maybe just wait a while, Nintendo could come out with some sort of amiibo data management app so you can save all that training. In our case we have enough other amiibo that work with Mario Party 10, that we’ll just play with those for now.

In the end, it speaks to the strength of Nintendo and how they can create such fun family game experiences, ones that we want to hold on to and remember. Our family started with Mario Party 8, which came out nearly 8 years ago now. That’s more than half a lifetime ago for my kids. I still remember my oldest, who was probably 5 at the time, bursting into tears because I had beat her at cranking a flag up the flagpole. Daddy was in the doghouse on that day!

Mario Party has grown with us and has given me a way to keep playing with my girls as they grow up. I’m sure one day they’ll not be as keen to play with dad, but until then, we’ll keep on playing, and creating those important family memories together.